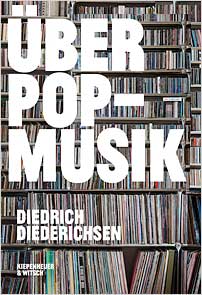 In this seminal and controversial book, Diederichsen (known in Germany as ‘the pope of pop’ and ‘the bookkeeper of subculture’) blends academic criticism with a distinctively individual exploration of pop music. Drawing on semiotics and sociology, on past and present popular culture, and on related art forms such as jazz, cinema and opera, Diederichsen looks beyond the music to construct pop as an aesthetic category. In doing so, he emphasises the role of listeners, dancers and audiences as actors who create the system ‘pop.’

Diederichsen makes it clear that he expects his opus magnumto be the cornerstone of a new science of pop music, separate from musicology. For him, pop is a space for aspiration, community and the breaking of taboos, and therefore particularly pertinent for the post-war generation. His line of reasoning is defined by associative thinking rather than structured discussion of his subject matter, and he skips gracefully from poststructuralist ideas to personal anecdotes. The book is a treasure trove that holds numerous rewards, particularly for those interested in the future of electronic music and rituals.

Diederichsen is a key figure in pop-cultural studies and his writings are theoretically and stylistically groundbreaking. On Pop Music is an outstanding work and was shortlisted for the Leipzig Book Fair Prize this year.

Diedrich Diederichsen was born in 1957 and has made a name for himself since the 1980s as both a versatile and astute theorist of pop, politics, and contemporary art. He teaches at various universities, including the Academy of Fine Arts in Vienna, where he has taught since 2006. He lives in Berlin and Vienna. Über Pop-Musik was shortlisted for the Leipzig Book Prize 2014.