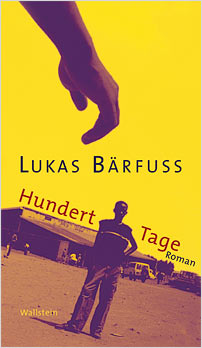 Hundert Tage is set in Rwanda in the years leading up to and during the Rwandan civil war in 1994 and the genocidal massacre of between 500,000 Tutsis (‘the tall people’) by the ruling Hutus (‘the short people’). It is narrated by the main character, David Hohl, a Swiss citizen sent to Rwanda on his first posting as an official of the Swiss Agency for Development and Cooperation, generally referred to simply as ‘the Agency’. A key event that will trigger his future reactions happens at the airport in Brussels when a young black woman in front of him in the queue is called negro by a Belgian official. He protests, is hauled off by security guards and misses his plane. But he remembers the young woman.

As he settles down to his work in Kigali, the capital of Rwanda, he finds that it is mainly clerical. All the Agency’s aid and efforts are directed into the channels of the local political structures and are therefore helping to maintain a dictatorial racist power. Personal aid and helpfulness, such as David would like to give, is regarded as sentimentality.

Soon after his arrival David meets the girl from the airport again. Her name is Agathe, and she works as a volunteer in the hospital where David is taken when, thanks to another lapse into ‘sentimentality’, he has been crushed while attending a meeting given by the Pope. The couple start an affair, the details of which are described in the crudest terms. The point of this is not pornographic. It is simply to make clear that for Agathe sex is purely functional, has no connection with emotions, is not an expression of love. It will later occur to David that the genocidal troops regard killing in the same way. It has no moral dimension for them. When the rebel army approaches Kigali the Europeans are evacuated but David stays behind. He feels revulsion that the aid workers, for all their declarations that they are there to help the Africans, can simply cut and run.

This is an extremely powerful novel, a devastating denunciation of the inadequacies of the Western powers through the actions of their agencies. As such, it demands to be read.

Lukas Bärfuss, born in Thun, Switzerland, in 1971, is one of the most successful dramatists to emerge in recent years and his plays are staged all over the world. Bärfuss was voted playwright of the year in 2005 in a poll of reviewers featured by the magazine Theater heute. Amongst many other awards is the important Mühlheim Dramatist Prize. Most recently he received the Anna Seghers Prize, an international prize for emerging authors. He lives with his wife and two children in Zurich.