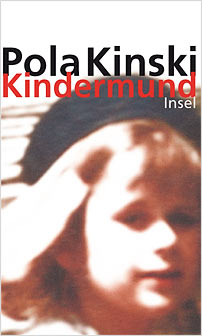 Actress Pola Kinski is the eldest child of German film star Klaus Kinski, who rose to fame during his long-standing collaboration with director Werner Herzog in the 1970s and 80s. In her autobiography Pola Kinski, now 60, reveals that she was sexually abused by her father for a period of fifteen years. Her decision to speak out about the abuse now, more than twenty years after Klaus Kinski’s death, reflects her wish to stem the rising tide of adulation for her father and set the record straight.

The incestuous abuse began when Pola was just five years old and continued until, already an accomplished actress, she was able to move away from her father’s orbit at the age of nineteen. Pola describes how her father paid her ‘to be his little sex object, placed on silk cushions. I kept quiet for years because he forbade me from talking about it.’ By the time the abuse began, Kinski had already divorced Pola’s mother and the parents were sharing custody of their daughter. Pola’s mother lost interest in her daughter after remarrying and Pola became isolated and lonely.

Klaus Kinski also married again and fathered another child. As his fame grew he travelled the world, living an eccentric life with many lovers. But he always returned to Pola, taking her to expensive stores where he would deck her out in suggestive underwear and fashionable clothes. Their luxurious world was one of fine restaurants, fast cars and beautiful villas in Italy and Spain, which held certain attractions for a young child but for which Kinski extracted the appallingly high price of fondling and raping his daughter.

Pola Kinski’s memoir is difficult to put down. On one level it is a sensational celebrity book which will interest the many people who followed Klaus Kinski’s high profile career. On the other hand this beautifully written book is also a sensitive description of how a parent can come to exert total power over a child. Pola documents the lamentably common scenario in which sexual abuse is perpetrated over many years, with all sorts of relatives around, including a mother who is likely to have known what was going on. In contrast to much more explicit accounts by other writers, Pola Kinski describes the abuse in a sensitive, cautious way. This lack of shock value adds to the credibility of the book and builds a strong sympathy for the author.

Pola Kinski was born in 1952 as the oldest daughter of actor Klaus Kinski. She studied acting at the Otto-Falckenberg- Schule in Munich. Pola Kinski lives in Berlin.