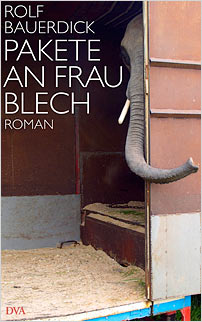 It is 2007 and Maik Kleine is about to leave Germany for the USA when he receives news that his surrogate father has died. Albert Bellman was also Maik’s employer and the ringleader of Alberto Bellmonti’s Circus. Maik heads to Berlin to take part in the funeral procession, which includes an elephant, a New Orleans jazz band, and a host of mourners from the circus world. The procession ends in Friedrichsfelde, the cemetery for socialists of the former GDR.

The mourners at Bellman’s grave have no idea why he would have chosen to be buried in the socialist cemetery. Maik has uncomfortable memories of the GDR: he was born in Leipzig and left for West Germany in 1979, aged thirteen, after his mother was accused of starting a fire that killed his younger brother and sister. The day after the funeral, Bellman’s grave is vandalised and Maik resolves to investigate, assisted by Szymbo, the bandleader, and Albina, the circus’s ‘Floating Virgin’. Szymbo, a staunchly Catholic Pole and aspiring avant-garde jazz musician, and Albina, a fallen prima donna who now lives in a communal apartment in Moscow, are both vocally scornful of Maik’s plans to go to America.

The narrative alternates between Maik’s life story and the days following the funeral. Maik learns of his siblings’ deaths while he is on a skiing holiday with the Free German Youth in Poland. His mother is incarcerated in an asylum and Maik grows up in a Jesuit boarding school. On his eighteenth birthday he leaves to join the circus and finds solace in the permanent homelessness of life on the road. The entertaining dynamic between Maik, Szymbo and Albina produces plenty of comic moments as they try to solve the mystery of Bellman’s life. What they discover is a complex riddle intimately linked with a past that Maik has willed himself to forget.

This exuberant new title from Rolf Bauerdick follows his prize-winning debut novel, The Madonna on the Moon, which appeared in English translation last year. Packages for Frau Blech has a sweeping scope and draws on an extraordinary array of high and pop culture. The book moves between a gently elegiac mood in the scenes dealing with Maik’s past to a comic, irreverent tone in the present day. Bauerdick performs the impressive feat of tying up every single lose thread, guaranteeing a satisfying end to this rollicking read.

Rolf Bauerdick was born in 1957, and studied literature and theology before turning to journalism and photography. His work has been awarded numerous prizes, among them Germany’s prestigious Hansel Mieth Prize. His articles have been published in Der Spiegel, Geo, and Playboy among other publications. He won the European Book Prize with his acclaimed debut novel The Madonna on the Moon, which has been translated into twelve languages including English. He lives in a converted flour mill in Northern Germany with his wife and children.