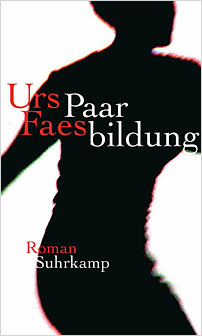 A delicate handling of sensitive subjects and a rare ability to describe subtleties of emotion will attract a wide readership to Faes’ impressive new novel.

Psychologist Andreas Lüscher has recently started work in the oncology unit of a hospital. In his new role, Andreas goes to great lengths to distance himself from the painful realities of his clients. But his composure is suddenly lost when he recognises the name of a new patient. The mention of a former girlfriend, Meret Etter, opens the floodgates to memories of their shared past and experiences of loss, which Andreas has long suppressed. The two meetings between the former lovers as patient and counsellor are deftly worked studies in their conflict between intimacy and distance. Meret opts for a meeting where a curtain separates patient and counsellor. Communication seems impossible for Andreas; but for Meret it appears to be the only way of re-establishing contact. Their second meeting begins haltingly, but gradually Meret gains confidence and begins to speak more openly about the years since their separation and her illness. Meanwhile, Andreas’s incapacity to communicate in words with his ‘patient’ becomes acute and finally he can contain himself no longer. Yet Meret shuns his attempts to approach her.

Now the thoughts and memories of each character are afforded equal space. Andreas travels to Italy, to a place where he and Meret had previously holidayed. Here his thoughts revolve around the past. In passages told from Meret’s point of view, Faes offers a sensitive portrait of the state of mind of a woman struggling with serious illness and now burdened by the memories of a failed relationship. Yet the mood at the end of the novel is optimistic. A letter from Meret leads to another meeting, this time far removed from the fraught atmosphere of their hospital encounters. Here they manage to find a way of talking about their past together. In this new context a genuine healing process is set in motion for both characters.

Pairing alternates between a sparse style which captures the emotional sterility of both protagonists and richly descriptive passages where Meret and Andreas recall episodes from the past. With a light touch Faes weaves allusions and symbols into vivid descriptions of nature. And the restrained style characteristic of much of the narrative is abandoned as Meret and Andreas become reconciled.

Urs Faes was born in Aarau in 1947 and now lives and works in Zurich and in San Feliciano (Italy). Faes received the Swiss Schiller Prize for his novel Und Ruth and for his last novel, Als hätte die Stille Türen, he was awarded the Canton of Zurich’s 2005 prize. He was shortlisted for the Swiss Book Prize in 2010.