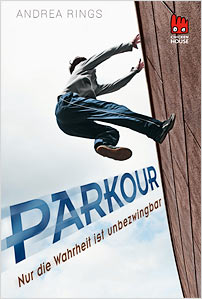 Andrea Rings walks the line between the real and the incredible with stunning agility in this fast-paced novel with international appeal.

Instead of hanging around with friends, fourteen-year-old Leo devotes his time to an unusual passion: parkour, the sport with the aim to get from A to B in the most efficient way, not dictated by architecture and culture.

When running through the (fictitious) city of Gothenheim, climbing onto walls or even a crane on a building site, Leo feels happy and free, much to the dismay of his policeman father. When his father suffers an anaphylactic shock and falls into a coma, Leo sets out to find his mother, who is said to have left the family twelve years ago on the night Leo miraculously recovered from a serious illness.

Leo follows a series of leads that bring him to an old castle hidden in an ancient wood. Sunna, whose fate seems to be intertwined with his, tries to convince Leo that there is some truth in the talk of treasure and magic hidden in the wood. Could the water from that secret well really have healing powers? Did his mother use it to heal him as a baby? Could he really be the ‘chosen one’?

Andrea Rings was born in 1965, and grew up in rural Germany. Being close to nature left a deep impression on her – she has been working as an environmental biologist for more than 20 years now. Her debut work Parkour was awarded the “Golden Pick” 2013. Ms. Rings lives with her husband and two sons in Mönchengladbach.