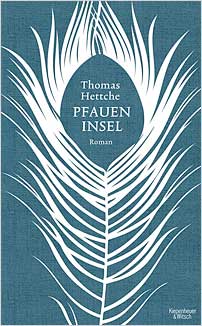 Thomas Hettche’s novel is both a refined flight of imagination and a fascinating glimpse into nineteenth-century Berlin.

One of the novel’s protagonists is Peacock Island itself: once a commercial rabbit warren known as Rabbit Island, but by the early nineteenth century a pleasure ground for the Prussian royal family. The other protagonist is Marie Dorothea Strakon, a young woman of dwarfish stature, imported along with her brother Christian to join the island’s curiosities. The pair live with the royal gardener Ferdinand Fintelmann and his sister-in-law.

In the opening chapter Queen Luise, King Friedrich Wilhelm III’s famously popular wife, encounters Christian and screams in horror and surprise: ‘Monster!’. The description is devastating to young Marie, who had previously thought that her title of Royal Lady of the Castle conferred real status on her. Now she is sadly aware of her deformities, and fears that her love for Gustav, a well-trained horticulturalist, cannot come to anything. It can and does, but Gustav has their baby taken away when he is only months old, before marrying a woman of normal stature and having several more children with her.

Marie’s spirits soar when she thinks she identifies a visitor to the island, an engineer from Ceylon with a Tamil wife, as her long-lost child sent away by Gustav. When the couple have left, she goes to sit in the derelict Palm House, and a spark from her cigar sets fire to the place. Marie dies in the blaze.

Almost all the novel’s characters are based on real figures, and some of the events, such as the 1880 fire in the Palm House, are historical fact. Marie’s story is sad and touching and, alongside the intriguing activities of botanists and zoologists in the novel’s background and foreground, Peacock Island becomes a microcosm of nineteenth-century views on nature combined with human desire.

Thomas Hettche was born in 1964 at the edge of the Vogelsberg, and after several years in Frankfurt and lengthy visits to Krakow, Venice, Stuttgart, Rome, and Los Angeles now lives in Berlin. His 1989 debut novel Ludwig muss sterben was highly acclaimed and his novel Der Fall Arbogast (2001) was a bestseller that was translated into 12 languages. Woraus wir gemacht sind was shortlisted for the German Book Prize in 2006. Hettche most recently published the novel Die Liebe der Väter, which was longlisted for the German Book Prize 2010, and the autobiographical essay collection Totenberg (2012) for which he was awarded the Literature Prize Düsseldorf 2012. Rights to his previous works have been sold to Denmark, Estonia, France, Italy, Great Britain, Lithuania, the Netherlands, Norway, Poland, Russia, Spain, Sweden, and the USA.