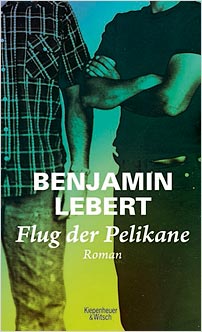 ‘I want to tell the story of a summer I spent with four American gangsters’. Such is the promising opening of this entertaining new novel, which describes the adventures of its protagonist, Anton, from the point when, dumped by his girlfriend Eleanor, he leaves his home city of Hamburg to spend the summer in Manhattan, living with his ‘uncle’ Jimmy, a Mexican immigrant and former boyfriend of his mother. For the duration of his stay he works in Jimmy’s luncheonette, manning the kitchen alongside his eclectic team, the easy-going 69-year-old Italian Francis (originally Francesco) and the Columbian compulsive gambler Zac, until the luncheonette becomes his second home.

Apart from the luncheonette, Jimmy has one overwhelming passion: Alcatraz, the legendary prison island in San Francisco Bay. Adding wherever possible to his large repertoire of anecdotes and theories, Jimmy has meticulously researched Alcatraz, and keeps all the information he can find in a big white box. He is particularly fascinated by the great escape of 1962, when three inmates succeeded in breaking out, and vehemently defends the opinion that they succeeded in reaching the mainland and began a new life. While drawn in by Jimmy’s stories, Anton is also confronted by phases of his own past, especially those associated with his stay in a mental hospital, which he would rather forget. The summer thus also reflects a process of insight, in which the twenty-four-year-old discovers why it can be vital to believe in the possibility of escaping one’s own circumstances and starting afresh. His stay in New York comes to an abrupt end when Jimmy dies of a heart attack and he himself returns to Hamburg – with good intentions for the future, and Jimmy’s large white box.

The style of this novel is in many ways more akin to spoken than written German. The biographies of the escaped inmates of Alcatraz and details of the prison and the great escape are rendered in italics and the latter part of the text also picks up the story of a small Mexican boy, who turns out to be Jimmy – which explains his obsession. It may also be remarked that Lebert’s first novel Crazy was successfully translated into more than thirty languages, suggesting that this young author holds international appeal. One to welcome back.

Benjamin Lebert was born in 1982 and started writing at the age of twelve. His first novel Crazy, published in 1999, has been translated into thirty-three languages and was made into a feature film by Hans-Christian Schmid. His second, Der Vogel ist ein Rabe, appeared in 2003 and his third, Kannst du, in 2005, all published by Kiepenheuer & Witsch. His home is in Hamburg.