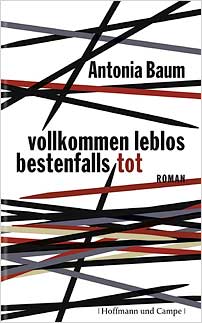 Taking up where Helene Hegemann’s Axolotl Roadkill (NBG Spring 2010) left off, Baum’s uncompromising portrait of modern life links the past of National Socialism with present-day capitalism in a way that is compelling, persuasive, and relevant. Her ability to combine multiple narrative strands through a first-person narrator makes the novel an intense reading experience.

Teenage Rosa feels she does nothing but wait. Her parents are divorced, and her relationship with her father and his second wife is turbulent. She decides to move to the city, but fails to gain entry to university and finds herself unhappily attached to Patrick, whom she dubs the ‘remotecontrolled gardener’ due to his propensity for the ciphers of success: the right clothes, fashionable home furnishings, desirable career (he works for a magazine). Rosa quips that his idea of a perfect girlfriend is one who is ‘perfectly lifeless, and ideally dead’. The stifling nature of their relationship means that Rosa often escapes for long periods, losing/finding herself in drink and drugs. After marrying Patrick and working for the magazine for a brief period, Rosa’s mental health deteriorates to such an extent that she sabotages the online newsfeed by inserting random Nazi-inflected obscenities. Her violent fantasies then culminate in a particularly graphic scene in which she envisages torturing and dismembering Patrick.

Rosa subsequently leaves and falls in love with Jo, an actor. However, this new relationship is equally unsatisfying, and Jo soon distances himself from Rosa, who becomes pregnant. Rosa is reunited with her mother briefly, who advises her to have an abortion – regretting her own decision as a young woman to keep Rosa. Rosa decides in favour of an abortion and attempts to carve out a life of her own by enrolling in university. However, she drops out and descends into self-imposed isolation, anorexia and self-harm. With Rosa intent on suicide, the novel ends as she is about to jump from a tall building, leaving it unclear whether she will or not.

Baum’s narrative style is as violent as the fantasies of her protagonist. Innovative neologisms and compound nouns command the reader’s constant attention. The protagonist’s lengthy reflections are juxtaposed with moments of irrational action, which lend the narrative its dark humour. An astonishing debut.

Antonia Baum was born in 1984 and studied literature and history. She is currently studying for a masters degree in cultural studies at the Universität der Künste in Berlin. She has published several short stories and this is her first novel.

Hoffmann and Campe Verlag is a publishing house with a long tradition. Founded in 1781, the publishing house was graced in its early days by such authors as Heinrich Heine and Friedrich Hebbel, as well as other members of the rebellious group of young writers known as ‘Junges Deutschland’. Hoffmann and Campe is one of Germany’s largest and most successful general publishers with a portfolio which embraces the works of famous authors and young talent. Since 1951, all works by the eminent writer Siegfried Lenz have been published by Hoffmann and Campe, and it also holds the world rights to authors such as Irene Dische, Matthias Politycki, Nicol Ljubic and Wolf Haas. The non-fiction list includes Stefan Aust, Joachim Bauer, Helmut Schmidt, Gerhard Schröder and Peer Steinbrück.