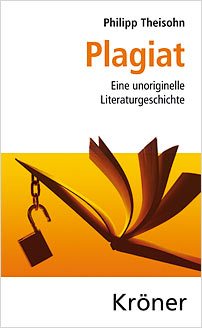 Theisohn’s fascinating history of plagiarism offers a fresh – and less literary – view of the issues at the cornerstone of literature: authenticity, originality and authorship. The author argues that if the literary text may be ‘owned’, then it may be the object of theft, and he relates this history of furtively stolen texts to changing philosophical, economic, psychological and judicial notions. A history of plagiarism is thus much more than just that – it is the story of how notions of authorship and text have developed over time and space, and of the theft of personality as well as words. The investigation is magisterial in its range, exploring the ‘crime of propriety’ in literature from the beginnings of Greek tragedy to the dawn of internet literature. An anecdotal style traces curious and exceptional episodes dotted throughout the history of European literature. How and why, for instance, did a Roman madly in love like Catullus succeed in stealing the love of the Greek Lesbia? Why does Luther dread the clandestine reprint of his writings, and yet is little bothered by a translation of the Bible that is largely a copy of his own version? And what does the original Don Quixote consist of? Approaching our own time, Theisohn asks what Franz Kafka, the lawyer, made of plagiarism.

These idiosyncratic and quirky episodes are intertwined with a wide-ranging examination of the changing literary scene. The tradition of competition in Ancient Greek tragedy led to widespread ‘stealing’ of material, while later in Roman times Horace defined a theory of ‘imitatio’ – the positive re-creation of Greek writing. The advent of Western Christian culture brought a new concept of literature as creativity, inspiration and intellectual property. Writers were simply responsible for revealing God’s word, and all ancient philosophy was seen as plagiarism because it assumed ownership of the truth. The goalposts changed once more with the advent of printing, and the Enlightenment questioned the ownership of knowledge itself.

The final section of the book brings the discussion right up to date with a very timely study of the digital revolution. Is downloading plagiarism? And what role do ebooks and the scanning of books and newspapers play in this debate? Theisohn’s characterisation of the internet as a playground for plagiarists closes this lively discussion; yet the debate remains highly topical and has – perhaps – only just begun.

Born in 1974, Philipp Theisohn has been Professor of Literary and Cultural Humanities at the prestigious Swiss Federal Institute of Technology (ETHZürich) since July 2008. Previously he was Lecturer in German Literature at the University of Tübingen. Theisohn has published widely on German and European literature between the 13th and 20th centuries.

Kroener Verlag has been publishing since 1904, specialising in non-fiction writing in the humanities, taking in literature, philosophy, history, arts, architecture, sociology, politics and psychology. Its books are aimed at students, experts and general readers with an interest in the humanities.