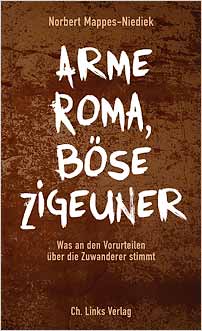 This timely book charts the fascinating history of the Roma people and considers their position within contemporary European society. Mappes-Niediek is a highly-respected journalist and writer and this well-written and clearly presented work is an authoritative contribution to an issue which is so often a target for sensational media coverage.

Poor Roma, Evil Gypsies begins by surveying the perceived ‘Roma problem’ which has been the focus of growing attention since the latest wave of EU expansion. The book is divided into seven chapters, each of which deals with a different aspect of the Roma way of life. The first chapter looks at why the Roma have not managed to lift themselves out of poverty and dispels the myth that they are naturally less intelligent and less prudent than other groups. The second chapter deals with Roma migration to Western Europe. There is particular focus on European countries that have a policy of ‘returning’ Roma children born abroad to their parents’ country of origin and the misery that this can cause. The myth of the Roma as a nomadic people is also dealt with here. Mappes-Niediek goes on to confront the sensitive issue of criminality among the Roma and comes to some surprising conclusions. He describes how begging is not generally organised by Roma gangs, but that this is just what people in the West tell themselves to assuage feelings of guilt when faced with beggars on the street.

Mappes-Niediek traces the history and culture of the Roma – their origins, their value systems, traditions and languages, as well as their background as slaves in the 19th century and how this affects them today. The wealth of interesting and memorable examples in the book is drawn from interviews, historical material, urban legends and folk tales. The author considers whether the Roma can be considered a nation or just an ‘underclass’, and the final two chapters look at the NGOs that make up the ‘Gypsy industry’, which some believe does more harm than good. Mappes-Niediek concludes by suggesting that the European infrastructure must be changed so that the ‘Roma problem’ can be solved, since it is not the Roma themselves or their perceived lack of recognition that makes things so difficult for them, but rather the fact that they continue to live in grinding poverty.

Poor Roma, Evil Gypsies is a great read – pacey yet balanced – which fills a notable gap in the non-fiction market.

Norbert Mappes-Niediek was born in 1953, has lived since 1992 as a freelance correspondent for Austria and Southeastern Europe in Styria, Austria. In 1994-5 he was Adviser to the UN Special Representative for the former Yugoslavia, Yasushi Akashi. He writes for the Frankfurter Rundschau, Der Standard (Vienna) and the NRC Handelsblad (Rotterdam).