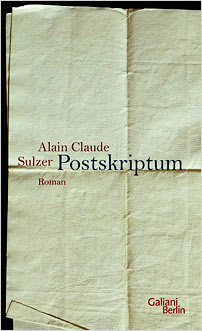 Alain Claude Sulzer showcases his characteristic mastery of understated narrative in this latest novel set in the 1930s during a tumultuous period of European history.

Postscript is a structurally complex novel which traces the loosely intertwined stories of three protagonists. The central cast consists of Lionel Kupfer, the most famous film star of pre-Second World War Germany, Walter Staufer, a postal worker born out of wedlock, and his illiterate, working class mother Theres. The three cross paths in the Swiss mountain resort of Sils Maria in January 1933, just weeks before Hitler becomes Chancellor of Germany. Walter is working at the local post office and cultivating a stalker-like obsession with Kupfer, who is enjoying his annual stay at the hotel in town. Theres has managed to secure employment at that same hotel, and is excited to be near her son, who as an adult has become almost a stranger to her. But the meeting between mother and son is not a success. Walter, who is striving to better himself, is less than enthusiastic to have his mother around, ashamed of her lack of education and refinement and keen to hide his homosexuality from her. Their brief time in Sils Maria, during which Walter entreats Theres not to mention their relationship to anyone, proves to be the last significant time they spend together. Walter and Kupfer meet in the hotel bar, where Walter has come to hobnob with the upper class clientele he wishes to emulate and be accepted by. They engage in a short love affair that ends when Kupfer is visited by his lover, Eduard, after which he abruptly leaves Switzerland and a broken-hearted Walter.

Postscript is a quiet, rather mournful story of lives never fully lived, relationships never fully realised, potentials squandered, time lost and unrequited love. Sulzer’s style is pensive and precise. There are no grand gestures here, only a skilful interplay between presence and absence, desire and indifference. The most arresting part of Postscript is, not surprisingly, the postscript that concludes the novel, setting out the last contact between Kupfer and Walter in 1963. Melancholia suffuses almost every page but never so much as in the final chapter, when an elderly Kupfer receives a letter from a middle-aged Walter and writes one in return. The two letters perfectly encapsulate the spirit of the novel.

Alain Claude Sulzer was born in 1953 and lives in Basel, Berlin and the Alsace. He has had numerous novels published, most recently the bestseller Aus den Fugen (‘Off Key’, featured in NBG in Autumn 2012). His books have been translated into English, French, Russian and Spanish, among many other languages. In 2008, his novel Ein perfekter Kellner (‘A Perfect Waiter’) beat Ian McEwan, Richard Ford, Don DeLillo, Denis Johnson and others for the Prix Médicis étranger in France, where it became a bestseller. His latest honour was the Hermann Hesse Prize, which he was awarded in 2009.