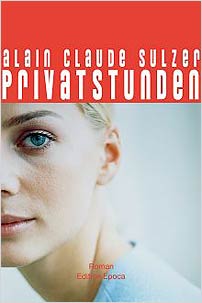 Leo Heger, a young emigrant to Switzerland from Eastern Europe, enters the life of Martha Dubach, a former teacher now bringing up her young family, when she undertakes to give him German lessons. Restrained at first, these lessons gradually become an important element in both their lives. On his side, as he becomes more able to express his thoughts, Leo begins to overcome his feelings of isolation, while his longing for his former love Laura, and his guilt at what he sees as his cold abandonment of her, also begin to fade. On her side Martha, as intimacy replaces reserve, becomes more and more aware of the absence of love and passion in her marriage of convenience to her husband Walter. Leo’s experiences of life and loss, when he confides in her about Laura, draw her under his spell, until the two become lovers. The issues of honesty and fidelity are brought to the forefront by Andreas, Martha’s son, narrator of both the book’s prologue and epilogue. He is the most observant character in the novel, first discovering his father’s infidelity with a colleague at work, then becoming suspicious of the increasingly close relationship between his mother and her student. Yet rather than judging he silently observes, as the reader himself is meant to do.

Silence, or a refusal or inability to speak, is a key element in several of the characters’ behaviour. Andreas’s grandfather, in his residential home, does not speak a word to any member of his family until shortly before his death; Olga, Leo’s grandmother, speaks only to her dog and herself; and in a memorable scene Martha herself, desolate at Leo’s failure to appear for one of his lessons, stands motionless, observed by her son, as she allows three plates to fall from her hands to the floor.

The plot ranges beyond Switzerland to both Eastern Europe and the USA, while Olga’s peasant lifestyle in the dark forests of Eastern Europe adds a tinge of Germanic folklore. The sheer beauty of its scenes and images, and its ability to convey the complexities of emotions and relationships, testify to the power of an author whose outstanding novel, with its blend of perceptiveness, melancholy and charm, will stay in the reader’s mind.

Alain Claude Sulzer was born in Basel in 1953. His first novel was published in 1983 and he has since written five further novels and numerous short stories. He lives in Alsace.

Edition Epoca is a small Swiss publishing house, founded in 1995. It publishes a handful of titles each year, specializing in quality non-fiction and literary fiction by German-language authors and international writers in translation. Its list includes books by Gilbert Adair and Aldo Buzzi, as well as a series of new translations of P.G. Wodehouse.