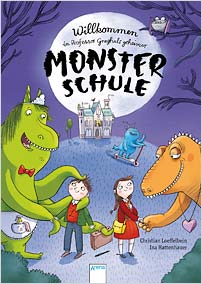 With its fast-paced action, lively dialogue and infectious humour, Professor Graghul’s Secret Monster School is guaranteed to capture the interest of young readers. The short chapters would make excellent bedtime stories for children from the age of five, who will delight in Christian Loeffelbein’s imaginative descriptions of the monsters with their comical names.

After their parents disappear in a plane crash, seven-yearold twins Lukas and Lena are sent to live with their uncle, Gregorius Graghul, who runs a boarding school for children with behavioural problems. The school is housed in a spooky castle and turns out to be a refuge for monsters from all over the world who have come there to learn good manners. Among scary ghouls, three-headed creatures and gruesome vampires, Lukas and Lena are relieved to meet a normal boy of their age. Nicki grew up in a French castle where he once opened a forbidden door in the cellar. Since then he has been plagued by a curse that will turn him into a monster on his eighteenth birthday. The only one who knows how to get rid of such a curse is the scariest of all monsters, the Arrrgh!, who disappeared centuries ago. As the Arrrgh! has proved impossible to locate, monsterologist Uncle Gregorius strives to find a cure himself while at the same time trying to hide his unusual pupils from the nasty school inspector, Mrs Dungbeetle. If she were to succeed in closing down the school, the monsters would be released into the world and would quite possibly forget their good manners, Nicki would be doomed, and Lena and Lukas would end up in an orphanage.

At first glance, the story of orphaned children who are sent to a special kind of boarding school seems to be a commonplace premise, but the idea of an institution teaching monsters good manners is brilliantly original. The human characters allow easy identification for both boys and girls while the monsters themselves are as weird as they are likeable. The slapstick comedy scenes such as one in which the monsters forget their table manners and throw food at each other will make children laugh, and there is plenty of suspense to guarantee goosebumps. Christian Loeffelbein has created an imaginative novel of international appeal that is enhanced by Ina Hattenhauer’s quirky illustrations, emphasising the humorous and grotesque element and ideally suited for the UK and other English-language markets.

Christian Loeffelbein was born in Kiel, Germany in 1968; he studied literature and art history in his home town and worked for the newspaper die tageszeitung (taz) in Berlin as a journalist. He subsequently worked as an editor for a magazine publisher in Hamburg, where he started to write his first children’s novel. He is now a full-time writer.

Previous works include:
Gate To A Thousand Worlds series (3 titles since 2012)