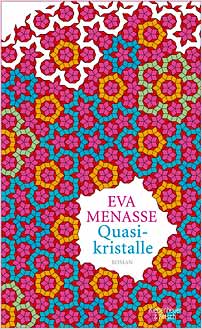 Eva Menasse’s accomplished second novel follows the life story of Xane (Roxane) Molin. As Xane is presented to us through the eyes of a multitude of family members, friends and acquaintances, we are reminded that while we may all feel like the central characters of our own lives, we are rarely more than incidental to the lives of others.

One of the most enjoyable aspects of this novel is the kaleidoscopic multiplicity of its perspectives and insights. Some of the episodes mention Xane only in passing, while others are observed by close friends and family members. We first encounter Xane through the eyes of her best friend during their Austrian schooldays. Successive viewpoints are those of an academic who conducts a study tour of Auschwitz that Xane attends; of Xane’s ultra-correct landlord from whom she rents an apartment; of a gynaecologist whom Xane consults about her infertility, only to find out that in fact she has become naturally pregnant; and of a distinguished campaigner against ethnic cleansing working for the International Court at The Hague, with whom Xane has a platonic liaison. Then we are treated to her own view of her marriage to Mor (Professor Moritz Braun) at a time when her son Amos is five, and her teenage stepdaughters are part of the family.

Towards the end of the book Xane is seen only as an anonymous figure sitting on a bench beside her husband, both now old, as he collapses and dies. The scene is witnessed from a window by a young Asian woman, Shanti, who campaigns against abuse of the elderly and has written a book on the subject. As the narrative progresses connections emerge between the book’s many fascinating characters, and loose ends are tied up: for instance, in the penultimate chapter we meet the son of Xane’s gynaecologist, now a qualified doctor himself and working with Shanti. It is these unexpected links that generate the intriguing kaleidoscopic patterns.

Menasse has followed up her bestselling first novel, Vienna (shortlisted in English translation for both the Independent Foreign Fiction prize and the Oxford- Weidenfeld translation prize), with a very different but equally thrilling work. Quasicrystals is a take on the seven ages of woman, and Eva Menasse’s achievement is in creating a work of fiction whose ambitious structure is part of the great satisfaction of reading it.

Eva Menasse was born in 1970 in Vienna, Austria, where she later began her career as a journalist. She now lives and works in Berlin as a publicist and writer. Her novel Vienna won the Corine Award for Best Debut and its English translation was shortlisted for the Independent Foreign Fiction Prize. Her short story collection Lässliche Todsünden also achieved great success among critics and readers.