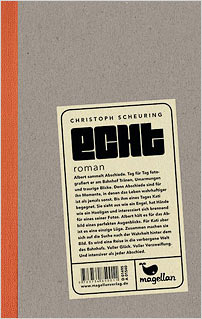 Christoph Scheuring’s experience as a journalist shines through in this gritty, well-researched mystery story.

Seventeen-year-old Albert spends all his free time at Hamburg Central Station, taking pictures of farewells. In his mind, these are the moments when people are more true to themselves than at any other time. It is there that he meets and falls in love with Kati, a girl who has run away from home and now lives on the streets. Kati is fascinated by his pictures, especially by his favourite, which shows a girl with a Mona Lisa smile being embraced by a boy.

Albert eventually realises that there is more to Kati’s obsession with this image: the girl it depicts is her sister. After their parents’ deaths, Kati’s sister disappeared and later threw herself in front of a train. Kati refuses to believe that she really wanted to kill herself and thinks that the boy in the picture might have had something to do with her sister’s death. Together, she and Albert set out to try and uncover the truth about what happened. Real is a compelling piece of fiction that will leave a lasting impression on adult and Young Adult readers alike.

Christoph Scheuring has written for many important German newspapers and magazines such as Der Spiegel and Die Zeit. Real, his first Young Adult novel, was inspired by street kids he met while researching one of his articles.

Magellan is an independent publishing house focusing on picture books and children’s and Young Adult fiction. They launched their first programme in July 2014 and aim to publish around fifty titles a year, all of them special in their own way.