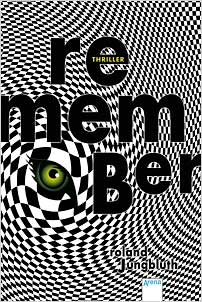 An action-packed debut novel, Remember tells the story of four British teenagers who find themselves in a psychiatric hospital in the summer of 1969. They do not know how or why they came to be there, and seeking answers to these questions, the foursome embark on a kind of treasure hunt which is also a journey of hope and disappointment. After following a series of cryptic clues and completing various challenges, their quest eventually leads them back to their old neighbourhood in Richmond, London.

The adventure story is interwoven with an interview from the year 2019 in which a scientist discusses his research project on the human brain. The project is called ‘Remember’ and has heralded extraordinary technological advances. Only in the final part of the interview is the truth behind the main story revealed: it turns out to be a game, but one with real-world implications. When specific regions of their brain are stimulated, the ‘players’ perceive a different kind of reality which they take to be their real life. Their fate is watched by people all over the world in an unsettling version of ‘Big Brother’.

An intriguing book which draws readers in and keeps them guessing until the end.

Roland Jungbluth was born in 1970. After finishing school he studied art history and worked in various professions. A former cartoon artist, he now brings his talent for storytelling to his debut novel.

Arena Verlag was founded in 1949 and is one of the most important publishers of books for children and young adults in Germany. They publish a broad range of titles in their fiction and non-fiction lists, including titles for all age groups – from toddlers to young adults. Arena was the first German children’s book publisher to start a paperback programme in 1958. Arena books have won numerous awards and been translated into many languages. They are also the German home of such internationally renowned authors as Tove Jansson, Steve Augarde, Neil Gaiman and Jo Nesbo.