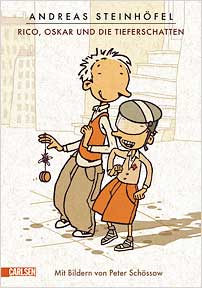 Rico Doretti is an unusual boy. ‘Tiefbegabt’ (‘lowly gifted’), is what he wryly calls his condition. He’s unable to retain instructions, mixes up left and right (hence is only allowed out if his route doesn’t involve turning corners), dislikes any change to his routine, and takes metaphors literally. And as for his spelling problems…

Rico lives in a Kreuzberg apartment with his beautiful, somewhat feckless mother, who works nights in a club (his father died in a fishing accident). His main occupation – apart from watching Miss Marple films with his elderly neighbour, Frau Dahling – is observing the other occupants of the apartment block, particularly Herr Marrak and his oversized laundry bag. While he struggles to cope with the whirrings of his own mind, he pays no attention to news about the ‘ALDI Kidnapper’ currently at large in Berlin and preying on local children.

Then suddenly everything changes for Rico. He acquires his first friend – a hochbegabt (‘highly-gifted’) and anxietyridden boy called Oscar, the exact opposite of himself, who is due to visit him when his mother is away but fails to turn up. Despite his lowly gifts Rico springs into action. Oscar, he realises, has been snatched by the ALDI Kidnapper, and suddenly he, the lowly-gifted one, is a detective.

This book grips the reader’s attention from the outset. A novel that begins with a boy trying to track down the owner of a desiccated bit of pasta that has landed on the ground outside a block of flats is unusual, to say the least, but in this very first paragraph Steinhöfel perfectly captures Rico’s unusual personality and sustains the balance in the character between endearing innocence and irritating tenacity right to the final page. Oskar may turn out to be smarter than his new friend, but their relationship is perfectly caught.

The book is written as a diary project for Rico’s school teacher, which gives it an added immediacy. Mark Haddon’s Curious Incident of the Dog in the Night Time, though very different in its subject matter, might be cited to indicate its tone, and additionally here is a children’s book with strong appeal to older readers as well as young ones. It’s a great achievement, and deserves wide recognition.

Andreas Steinhöfel was born in Battenberg in 1962. He works as a translator, literary critic and writer of screenplays, but he is best-known for his many prizewinning books for children and young adults. His bestseller Die Mitte der Welt was nominated for the prestigious Deutscher Jugendliteratur Preis in 1999 and has been widely translated. Alisa Jaffa’s translation of that novel was a finalist in the 2005 L.A. Times Book Prize.

Carlsen Verlag was founded in 1953 as a subsidiary of the Danish company Carlsen, Copenhagen, so that their series for younger children could be published in German translation. Carlsen Verlag Hamburg has been publishing its own titles since 1964, ranging from picture books for younger children to novels for young adults. Educational series include both fiction and non-fiction for kindergarten and primary school levels. Carlsen Comics were the first to introduce comic books to the German market.