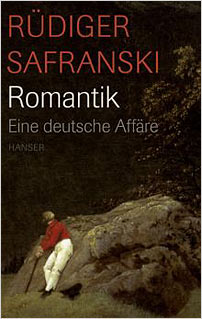 When Rüdiger Safranski had completed his doctorate at the Freie Unversität, Berlin, he wished to write a habilitation thesis on the topic of the German Romantic E.T.A. Hoffman. The editor at Hanser to whom he offered the idea replied: ‘If you write a readable book about E.T.A. Hoffman we shall print it, and if you write a habilitation thesis for the university, we shan’t’. Safranski chose the former course, wrote a literary biography at a time when academia was withdrawing more and more into its ivory tower, scored a tremendous popular success with later monographs on Schopenhauer, Heidegger, Nietzsche and Schiller, and now appears frequently on philosophical talk-shows, evoking no little envy and resentment from fellow academics.

His latest book is divided into two sections, the first on the German Romantic Movement of the early nineteenth century, the second on its ideological tendencies and after-effects. He offers as a basic definition of German Romanticism Novalis’s famous formulation: ‘By lending the commonplace a lofty meaning, the customary an aura of mystery…, the finite a semblance of the infinite, I romanticise it’ – adding, to emphasise the rediscovery of the numinous, his own adaptation of Clauswitz’s definition of war: ‘Romanticism is a continuation of religion by other means’.

He is of the opinion that Romanticism ‘is not just a German phenomenon but has assumed a special impress in Germany, leading to a flight from reality into the Self and the distant past and to what György Lukács called ‘the German malaise’ and Helmuth Plessner ‘the belated nation’; and from this follows an important debate on whether Romanticism contributed to preparing the ground for Nazism. He finds that Romanticism contained no traces of the biologism and racism of the Nazi Movement, but sees to what extent a romantic mentality can fall prey to political extremism, so that even the students’ revolt of 1968 is to some extent a manifestation of it. He concludes that the Romantic Movement as an epoch is past, but romanticism as a mindset has remained – adding as a warning that whenever it flows into politics, it should contain a strong admixture of realism. A warning to be heeded, and perhaps not by Germans alone, on a theme with still topical and unsettling ramifications.

Rüdiger Safranski was born in 1945 in Rottweil in Württemberg. His work has been translated into 19 languages and has received numerous awards. His acclaimed biographies of E.T.A. Hoffmann, Schopenhauer, Heidegger, Nietzsche and Schiller are all published by Carl Hanser Verlag.

Carl Hanser Verlag was established by Carl Hanser in 1928 in Munich. Its founder’s interests in both literature and science have been maintained to the present day. The firm publishes fiction and non-fiction for both adults and children. Its authors include Italo Calvino, Umberto Eco, Jostein Gaarder, Lars Gustafsson, Milan Kundera, Harry Mulisch, Philip Roth, Susan Sontag, Botho Strauß, Raoul Chrott, Rafik Schami, Alfred Brendel, Elke Heidenreich and ten Nobel prize-winners, among them Elias Canetti, whose works have been translated into more than twenty different languages.