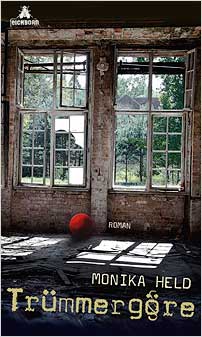 Rubble Wretch is Monika Held’s compelling story of an unusual upbringing in post-war Hamburg, as Germany experienced its ‘economic miracle’.

Juliana is in her late thirties and contemplating a move back home to Hamburg with her boyfriend of the past five years. Juliana – called Jula by everyone except her father – lost her mother when she was four years old. Her father worked for the Foreign Office and was always travelling, so left his daughter with her grandmother at Wielandstraße 3. As she casts her mind back to this Hamburg childhood, the novel flashes back to Jula’s years with her grandmother, and uncovers a site of mystery and trauma.

Somebody else shares the Wielandstraße apartment – Hans, an uncle Jula has never met before. Jula’s grandmother and Hans live entirely separate lives, never even speaking. Hans is resentful of his mother, and Jula eventually learns the reason: that as a young child he had been locked in the cellar while his mother was at work. One of the book’s final revelations is that he was also traumatised by a horrific wartime experience, to which his mother reacted callously when he returned home.

Young Jula lives in two worlds: there is her grandmother’s traditionally domestic sphere, and there is Uncle Hans’s used car dealership, where she spends much of her time as his sidekick. When Jula’s father returns, eight years after leaving her, she moves back in with him. But a distance remains between them, and she continues to spend much of her time with Hans. Having learnt that both her father and her uncle were in love with her mother, she also wonders whether Hans might in fact be her real father.

When Jula goes to live with her father, he places her in a better school and she is transformed ‘from rubble wretch to swan’. Her development mimics the ever-growing prosperity in Germany during the 1950s and 60s, and stands in stark contrast to Hans’s rising paranoia. In a final break with his mother, Hans kills her beloved bird Hansi, and when Jula is seventeen he commits suicide. Twenty years later, the adult Jula now has the chance to return to Wielandstraße 3 – an opportunity that forces her to confront and remember this past.

Held’s fine novel is filled with local colour and detail and brings a unique child’s-eye view to this transitional phase in history.

Monika Held grew up in post-war Hamburg. She apprenticed in publishing and edited a company magazine before becoming a freelance journalist. Her career takes her all over the world, and her research focuses on the people at the centre of the stories. She has been awarded many prizes for her journalism and her political commitment. She lives in Frankfurt am Main, Germany.

Eichborn is the publisher of Look Who’s Back by Timur Vermes, which was published by MacLehose Press in April 2014 and was widely acclaimed and very successful. Many Eichborn works have been translated into English, including A Woman In Berlin by Anonymous, The Old Child, The Book Of Words and Visitation by Jenny Erpenbeck, The 13 ½ Lives Of Captain Bluebear and Wild Journey Through The Night by Walter Moers, W.G. Sebald’s The Emigrants, The Rings Of Saturn and Vertigo as well as Ice Moon, Silence and The Winter Of The Lions by Jan Costin Wagner. Eichborn became a division of Bastei Luebbe in 2011, and continues to discover and establish original and exciting authors’ voices with its characteristic verve and vigour.