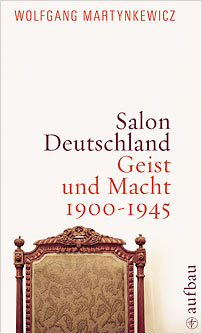 In Martynkewicz’s masterly survey the right-wing, antidemocratic ideas of many well-known names, such as Thomas Mann, Rilke and Hofmannsthal, are considered, as well as those of lesser-known writers and thinkers. The salon is the home of the publisher Hugo Bruckmann, where most of the writers discussed were frequent visitors. Bruckmann principally produced works relating to the arts, with the exception of the outpourings of one of the spiritual fathers of Nazism, Houston Stewart Chamberlain. He also facilitated the publication of Mein Kampf, and indeed his wife Elsa maintained a fanatical belief in Hitler.

Martynkewicz divides his book chronologically, suggesting that a different atmosphere prevailed in the salon and hence in right-wing intellectual circles at different times. Before 1914 there was a certain pluralism, with debates on the merits or otherwise of modern French painting and different attitudes towards Jews, who were also numbered among the guests of the salon. Even Chamberlain saw the evils of Judaism as less a matter of race than of attitudes which could be overcome. By contrast Ludwig Klages, a leading proponent of graphology, was an out and out anti-Semite.

Differences were overcome with the outbreak of war, which most of the people in question regarded as a cultural struggle: as Thomas Mann put it, a conflict between German culture, which had to be preserved, and French civilisation. The war was also seen as potentially having a kind of cathartic effect which would take Germany to a new cultural dawn in which the traditional dichotomy between intellect and power might be overcome.

Since the birth of Expressionism, the idea of the ‘new’ man had become current in certain intellectual circles. For Elsa Bruckmann and many others, Hitler, who became a regular guest at the salon in the 1920s, was the embodiment of this idea. Several guests were won over by his self-confessed barbarity, which they saw as a quality necessary for the sweeping away of society’s decadence, and Hitler himself used the opportunities offered to ingratiate himself with people of a certain influence.

Salon Deutschland is a fascinating book and spans a huge range of important literary, philosophical and political figures. Well-written, it will attract considerable attention in the United States and other English-speaking countries.

Wolfgang Martynkewicz is an Associate Professor of Literature at the universities of Bamberg and Bayreuth. As part of a project on the German research community, he edited the writer Oscar A. H. Schmitz’s diaries, which were published in three volumes by Aufbau Verlag (2006-08). He has published many works on the literature of the 19th and 20th centuries as well as on the history of psychoanalysis; on Jane Austen, Edgar Allan Poe, Arno Schmidt, Sabina Spielrein, C. G. Jung, and Georg Groddeck, among others.