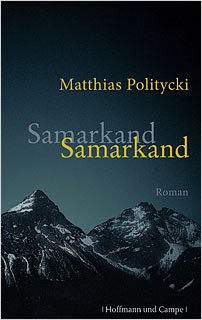 The latest novel from acclaimed author Matthias Politycki is an ambitious work that has been some twenty-five years in the writing and will keep readers intrigued from start to finish.

Samarkand Samarkand is the story of one man’s quest to save the West from total destruction. The novel is set between 2027 and 2029, against the backdrop of a Third World War which has seen Germany fall to two competing world powers: Russia and the newly established Caliphate. Alexander Kaufner, a former frontier runner, is tasked with travelling to Samarkand. His mission is to locate the whereabouts of Timur’s fourteenth-century grave and destroy the sometime ruler of the Muslim world’s sacred bones which, as legend has it, have conferred wartime invincibility on his descendants.

The title of the novel is programmatic: there is a second Samarkand located deep in the mountains, the polar opposite of the World Heritage Site to which tourists and pilgrims flock each year. It is there at an ancient cultic site that Kaufner suspects the key to the mystery lies. With his guide, Odina, he must traverse the mountains of Central Asia, battling the elements and the onset of war, not to mention the ghosts of his own past while the burden of the Western World’s survival sits heavily on his ageing shoulders. Fortunately he has a guardian angel in Shochi, who is the daughter of his contact in modern-day Samarkand and a teenage girl possessing the gift of second sight. Shochi is a surrogate child for Kaufner who has lost his own wife and daughter in the madness enveloping Germany and it is through her that he finds the courage to see his mission through to the end.

Samarkand Samarkand is an epic novel written in an impeccable literary style which deals not only with our relationship to the foreign but also with the nature of history itself. What is human history, the novel asks, if not a series of repetitions – a cycle of triumph and decline played out against the indifference of the natural world around us? Politycki’s narrative leads the reader over winding mountain passes, through a war-ravaged twenty-first century that is no longer recognisable but nonetheless utterly plausible. This arresting version of 2028 is full of the sort of brutality and violence we might associate with the Middle Ages and is sure to captivate contemporary readers.

Matthias Politycki was born in 1955 in Karlsruhe, Germany and is one of Germany’s most critically acclaimed literary authors. He has published over twenty novels and poetry collections. His books have sold over 200,000 copies and have been translated into several languages, including English, French, and Italian. His novel Next World Novella(Jenseitsnovelle) was published in 2009 and has been received with critical praise in Germany, England, and France.

Hoffmann und Campe, founded in 1781, is a publishing house with a long tradition and today one of Germany’s largest and most successful general publishers with a portfolio that embraces the works of famous authors and young writing talents. Since 1951 all works by the eminent narrative writer Siegfried Lenz have been published by Hoffmann und Campe.