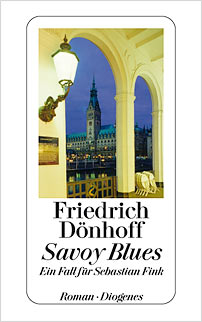 Welcome to a new crime novelist on the German literary scene, and welcome also to his sleuth, Police Inspector Sebastian Fink. The setting is present-day Hamburg, the time summer, the book’s title and plot both echo of one of Louis Armstong’s tracks from the 1930s, now, some seventy-five years later, being aired on radio by an eighty-something disc jockey known as DJ Jack. Of course, back in those days, the Nazis were banning swing. But also back then, in 1941, three young men – Karl Perkenson, Joachim Menzel (aka DJ Jack) and Hein Hansen – betrayed a mutual female friend called Marga Viersen who died, aged 18, in the concentration camp at Fuhlsbüttel, just days after giving birth to a daughter.

Fink, 34 and single, begins work in his new job as a Police Inspector and is soon investigating the murder of Perkenson, previously of course unknown to him. The murder of DJ Jack soon follows – immediately after a television appearance which, by coincidence, Fink has been watching with Anna, an old friend from schooldays, and Leo, her seven-year-old son, with whom he is now lodging. His interest in digital technology has enabled him to spot the alarm on Menzel’s face as he leaves the set. Instinct further prompts the detective to suspect that the two murders are linked – and soon he has latched on to the shared factor, swing. With two of the trio dead the race is on to reach the third – and also to track down Leo, whom the avenging killer has kidnapped.

Dönhoff’s writing is a model of clarity, and Hamburg transpires to be a most alluring setting for crime. The aspect of swing music having been despised, and criminalised, by the 1930s and 1940s regime has been little explored in literature and lends the whole a fascinating edge. In Fink, however, we have a detective of our time, from his unusual ‘family’ situation to his experiences in the singles’ scene. With this rising star of the police world still a mere stripling, and with decades of cases surely ahead of him, a wideawake British publisher should grab him now!

Friedrich Dönhoff was born in Hamburg in 1967 and grew up in Kenya. After completing his studies in history and political science, he made his breakthrough as a non-fiction writer, in particular with his bestseller Die Welt ist so, wie man sie sieht (‘The World is the Way You See It’), a loving portrait of his great aunt Marion Dönhoff.