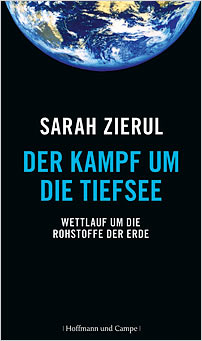 The subject of deep-sea exploration and exploitation could not be more topical, and this important new book by an award-winning documentary film-maker succeeds in bringing their implications to the attention of a public that is largely uninformed about the corporate and governmental activities currently taking place in the oceans.

We witness the launch of a new remote-controlled robot off the coast of New Zealand, capable of withstanding conditions at 6,000 metres below the ocean’s surface and therefore able to obtain video footage and to collect geological samples, including gold, silver, copper and zinc.

We discover details of the decade-long Census of Marine Life which is coming to an official close this year, with its extraordinary number of newly found marine species. We visit floating drilling stations off the coast of Angola, and consider whether the oil companies have any interest in the environmental consequences of their activities or whether the wealth garnered by the Angolan government from the sale of their waters shows any sign of trickling down to the general population. We look at nation states scrambling to claim marine territory and the resulting geopolitical tensions. We hear the concerns of marine biologists fighting for legislation to enforce fallow spaces in the ocean. We also learn that some corporate groups are keen to see deepsea ecosystems preserved – the cosmetics industry sees a potential source of ingredients at the bottom of the sea, for example, and the chemical industry is interested in the organic plastics that might be created with deep-sea microbes.

Scramble for the Deep Sea is a fascinating and wellresearched introduction to the commercial and scientific value of the deep sea; it weaves a history of deep-sea exploration with an exposé of contemporary geopolitical issues and informs without being didactic or overly partisan.

Sarah Zierul was born in Düsseldorf in 1978. Since 2002 she has been working as a writer and producer of television documentaries. She studied Politics and Theatre, Film and Television in Cologne and Malaga and worked as a trainee with NDR in Hamburg. She now lives in Berlin und Cologne and works on scientific films, cultural programmes and political documentaries for WDR, NDR, ZDF and Arte. She made several award-winning films on the deep sea before beginning to record her experiences in this book.