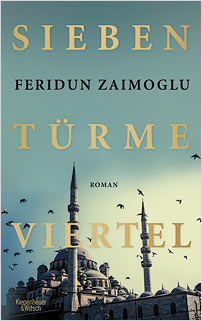 Controversial, provocative and exciting, the writer, playwright and artist Feridun Zaimoglu has been challenging German audiences since he burst onto the scene with his first work Kanak Sprak in 1995. Born in Bolu, Turkey, raised in Berlin and Munich, and at home in Kiel for many years now, Zaimoglu is rightly feted as ‘one of Germany’s most important contemporary authors’ (Spiegel).

In Kanak Sprak the author presents himself as interviewer, giving us his interviewees’ words in sharp bursts of a uniquely stylised language that mixes rap, Turkish-German street slang and Kiel dialect (for the ‘sound’, think Gautam Malkani’s Londonstani in the British context). Zaimoglu went on to capture the public imagination with a series of explosive talkshow appearances in which he reclaimed the term ‘Kanake’ (formerly a racist insult), unmasked a series of apparently liberal public figures, and emerged as a forceful ‘enfant terrible’ – and cult author.

Zaimoglu has since published prolifically, and with impressive range. His seventeen books to date include a ‘Kanak-Romantic’ makeover of Goethe’s Werther (the epistolary Liebesmale, scharlachrot; ‘Love-brands, scarlet’, 2000); a ‘very European’, multi-site novel peopled by ‘dreamers and smoking guns’ (Hinterland, 2009); and Ruß (‘Soot’, 2011), his Ruhr Valley epic, set in a downtrodden, industrial milieu. Zaimoglu’s work is broadly characterised by vital, vibrant language, with critics highlighting the Romantic drive of his outsider heroes. In his work as a playwright, he collaborates with Günter Senkel, both to develop new pieces, like 2006’s monologuedriven montage of unapologetic, no-holds-barred young German Muslim women, Schwarze Jungfrauen (‘Black Virgins’), and to reshape and revitalise classics such as Shakespeare’s Othello (2003). As visual artist he staged his first comprehensive solo exhibition in 2013 in Lütjenburg, coinciding with the publication of his illustrated novel Der Mietmaler (‘Artist for Rent’) in the same year.

The spotlight on Zaimoglu as public figure has never really gone away, perhaps as a result of the voice and platform he created early on, his commitment to taking literature beyond the ‘middle classes’, and latterly his co-option as ‘public Muslim’. But above all, Zaimoglu epitomises – and performs – the figure of the author, working on a typewriter and marking corrections by hand, and is well-known for his gripping readings, as attested by his Jury Award from the Ingeborg Bachmann Prize (2003) and the 2012 Prize of the Literature Houses.

It was with Leyla (2006), his first work centred on Turkey and, as he described it, ‘the story of a simple woman of the people’, that Zaimoglu hit the mainstream. This novel lost none of his commitment to language, ‘sound’, and powerful, often visceral prose, instead gaining him a wider fan base through this, his ‘least furious’ narrative (Spiegel). Reviewed enthusiastically across the board, Leyla sees Zaimoglu proving his talent for morphing into his characters, capturing the voice of his female protagonist as she grows from young Turkish girl in a small 1950s Anatolian town to twenty-year-old woman stepping off the train in Munich. The novel has sold 100,000 copies and has been translated into eight languages. Opening with the words ‘This is a story from olden times. But it’s not an old story’, Leylauses its quietly resilient, eponymous protagonist to throw a critical eye, albeit a subtle one, on her authoritative world. ‘I come from a family of strong women’, says Zaimoglu, who draws here on meticulous transcriptions of his mother’s oral narration of her life. Largely staying at Leyla’s ‘eye level’, the novel sidesteps sentimentality and moralising, instead giving us decidedly grey-toned characters (in particular the father and husband), an everyday that’s both beautiful in its details and simmering with an undercurrent of violence, and, ultimately, the small-town dream of a better life, which Leyla reaches for quite literally at the novel’s close: ‘I’ll stroke the wolf, and maybe he won’t bite the hand on his back.’

Zaimoglu’s new novel Siebentürmeviertel (‘Seven Towers’) appears this autumn and marks a return to Turkey, this time to an impoverished district of Istanbul in the 1930s-40s, and to a male voice – that of (another) Wolf, a boy provocatively nicknamed ‘the Aryan’ or ‘Hitler-son’. Wolf comes to the area having fled Nazi Germany with his father Franz, a dissident schoolteacher. But the war is almost a non-event, and the ‘ethnic’ German ‘acts out’ the Turkey of Zaimoglu’s own father’s childhood, first as a tough, loyal Seven Towers boy, and later as a flaneur of central Istanbul nightlife and its underbelly, with a penchant for revolutionary poetry. The chapters’ titles, shaped by the ninety-nine names of God, seem to make ironic comment on their almost visually-charged contents, especially on the powerful revenge drama with the Chechen antagonists, where ‘The Merciful’ sees a crow’s head ripped off, and the final chapter, ‘The Patient One’, a memorable description of a dead body.

As influential critic Volker Weidermann remarked in his Leylareview: ‘If Zaimoglu didn’t exist, he’d have to invent himself’. It’s high time he had an Englishlanguage audience.

By Kate Roy
Kate Roy lectures in German literature and Comparative Cultural Studies at Franklin University Switzerland and is an Honorary Research Fellow of the University of Leeds.

The NBG funding guarantee applies to Zaimoglu’s latest novel, Siebentürmeviertel (2015). See our glowing review of Leyla (2006), as well as a sample translation from that novel.