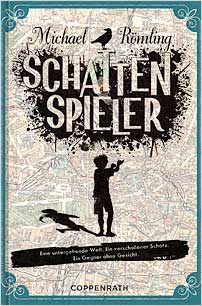 Michael Römling’s page-turner is grounded in an exquisitely detailed historical setting worthy of a work of adult fiction.

Shadow Player opens in Berlin in the last days of the Second World War. The Nazi leaders are either dead or in hiding and the Red Army is closing in on the destroyed city. Leo, a fifteen-year-old Jew, has survived the war. After the deportation of his parents he was taken in by an art historian named Wilhelm. When British bombers attack, Leo is separated from Wilhelm but manages to escape the inferno in Berlin through a maze of underground tunnels. He finds the surrounding villages in chaos as the Germans flee the advancing Russians.

Returning to Berlin, Leo’s path soon crosses that of sixteenyear- old Friedrich Häck. The boy lives in a grand house with his mother and has just learnt of the death of his father, a high-ranking Nazi, who left behind a letter with a picture of the family grave. Friedrich finds an old oil painting in the grave but does not know what this might mean. In fact, his father was the head of a Nazi looting organisation, tasked with seizing art collections and other cultural assets.

So the two boys team up: Leo wants to find Wilhelm, and Friedrich wants to know the truth about his father, but they have no idea how closely the two are connected. Both men had been looking for a priceless collection of twentynine masterpieces confiscated by the Germans in occupied France. Leo and Friedrich are dragged deeper into the hunt for the missing treasure in a risky adventure set in the unpredictable world of war-torn Berlin.

Shadow Player is a classic action adventure story with plenty of cliff-hangers and twists and turns in the plot. The narrative moves expertly back and forth between the main characters, gradually weaving them closer together. The truth slowly emerges, but even at the end a tantalising uncertainty remains. Römling’s sensitively-told story presents a powerful and comprehensive picture of Berlin at the end of the war. Vivid accounts of the bombings are interspersed with descriptions of the crimes perpetrated by the Red Army, as well as hints of the surreal normality of the summer of 1945, spent in the ruins of the zoo or lazily bathing in a lake. Shadow Player has all the ingredients of a popular novel for young adult readers.

Michael Römling was born in Soest in North Rhine- Westphalia and studied history in Göttingen (Germany), Besançon (France) and Rome (Italy). Following a scholarship at the German Historical Insitute in Rome, his doctoral thesis explored the role of Spanish soldiers in Italy during the 16th century. Besides historical novels for young adults, Römling also publishes and writes historical city guides and illustrated books. He currently lives in Göttingen.