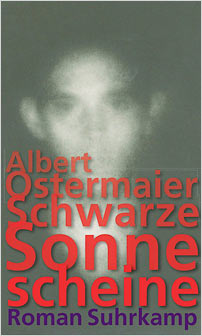 Ostermaier, leading poet and playwright, is a maximalist, and his eagerly awaited, possibly autobiographical, second novel is magnificent and baroque: a wonderfully over-thetop self-examination of the artist as a young man, and a profound investigation into our deepest fears.

It is 1991 and Sebastian is a reluctant Law student who spends most of his time working on his poetry. Two years ago, he returned from a trip to Yemen seriously ill. Even though he has since made a full recovery, when an old family friend suggests he see a specialist who saved his own life, Sebastian agrees. The old family friend is Silvester, the Prior of the monastery in Sebastian’s home town, and the first person actively to encourage his artistic ambitions. The specialist is Sybille Scher. When the results of Scher’s examination come in, Sebastian’s world implodes: apparently, he carries a deadly virus and has a maximum of six months to live. His girlfriend Klara, a Protestant who is inherently suspicious of Silvester and the Catholic establishment he represents, insists that he get a second opinion. This shows Sebastian to be healthy; and the professor who examines him also makes inquiries into Scher and finds out that she is, by all accounts, an impostor.

For a second time, Sebastian’s world implodes: has he been betrayed by Silvester, the one person he trusted more than anybody else in the world? However, the question of Silvester’s involvement with Scher remains unanswered because Sebastian’s parents beg him not to take the story to the media – as small business owners in a provincial town they cannot afford to alienate the Catholic establishment. For the next twenty years, silence reigns in Sebastian’s family about these events. Finally, Sebastian has to undergo emergency surgery and, coming to after the operation, decides that he will remain silent no longer.

By making his protagonist and narrator a young writer, Ostermaier cleverly manages to justify, and at the same time ironically undercut, even his most outrageous flourishes. So the real pleasure in reading the novel is in the ongoing interior monologue Sebastian conducts with himself throughout the book, a monologue that’s rich in allusions to literature and culture high and (occasionally) low and that is clearly, and charmingly, in love with its own verbal inventiveness. The language makes Shine, Black Sun what it is. A darkly sparkling gem.

Albert Ostermaier is one of Germany’s foremost poets and playwrights. He was born in Munich in 1967 and has been writer-in-residence at the National Theatre in Mannheim and at the Bayerisches Staatsschauspiel in Munich. Albert Ostermaier has received various prizes for his dramatic works and has published more than twenty books and twenty-eight plays with Suhrkamp.