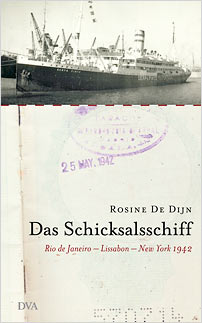 The author of this book set out to research the history of the Jews of Antwerp during the Second World War. Antwerp was her home town. She was born in the war, and feels that her parents’ generation stands in need of a testimonial. But to add both drama and breadth to her account she incorporates the story of the Portuguese ship the Serpa Pinto, and the passengers who sailed on her in 1942. In May of that year she carried German Brazilians who believed it their duty to return to the Fatherland. On her return she carried 677 Jews to safety, via Casablanca to New York.

Having begun with this framework, and an investigation of the backgrounds of the German nationals who at various times had sought a better life in Brazil, the book homes in on two returning Jewish families, the van Leeuwens and the Padawers. The story of the growing harassment of the Jews following the German invasion of Belgium, turning to deportation and mass murder, is told in detail, naming both the Belgian fascist persecutors and the resisters.

How to categorise this book – history or faction? Either way, it’s a story that had to be told.

Rosine De Dijn was born in Flanders in 1941 and has been living near Cologne, where she works as a freelance journalist, since 1966. She has been a frequent contributor to Belgian radio programmes, Flemish newspapers and German magazines, often on subjects connected with her native Belgium. She has also written several books.

Previous works include:
Du darfst nie sagen, daß du Rachmil heißt (‘You Must Never Tell Anyone That Your Name Is Rachmil’, 2005), published in the Netherlands (Van Halewyck).

For more information about Deutsche Verlags-Anstalt please contact the Editor.