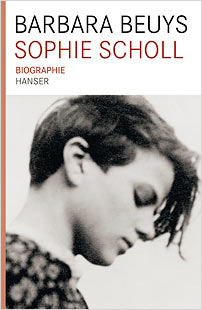 The unique true story of a young student’s resistance in Nazi Germany, and her death for the cause of the White Rose movement that she believed in so fervently, received the attention it deserved with the recent film of her life.

This accomplished biography complements that portrayal by presenting a wonderfully detailed account of Sophie Scholl’s whole life rather than primarily an account of her resistance involvement, and includes aspects that will be less wellknown (Sophie’s parents’ backgrounds, her enthusiastic involvement in the Hitler Youth movement as a teenager, her work experience before university, and her gradual turning against the regime), as well as those with which readers will already be more familiar.

Much of the material on which the author draws is absolutely fascinating. The quotations from sermons in which ministers share their belief that the newly appointed Führer was sent by God, and the lengthy account of the enthusiastic involvement of the Scholl children in the Hitler Youth movement are particularly striking, and give the reader real insight into why Hitler was so popular in Germany in the early days of his dictatorship.

There is a large number of quotations from a variety of types of sources, some very personal and informal (including, for example, a note written by Sophie during a lesson at school to the young man that she fancies), others much more official. The overall thread of the story is clear throughout, and the biographer’s voice never disappears behind all these other sources. Beuys is unafraid to draw her own interpretations: for example, she quotes from a letter written by Sophie’s grandmother to her mother in 1909, and comments, ‘These are the words of someone who is not afraid to acknowledge their emotional needs, but is able to do so without becoming sentimental.’ Such overt personal evaluations included in the biographer’s account offer a fresh approach and understanding to English-language readers already familiar with the Sophie Scholl story.

Readers will find this detailed account of Sophie Scholl’s whole life of considerable interest, not only in terms of the way in which it provides more of a background to the heroic actions of Scholl and the others in the White Rose group, but also because it offers insight into the early Nazi years, and what these were like for German teenagers like Sophie and her brothers and sisters.

Barbara Beuys, was born in 1943 and studied history, philosophy and sociology. She has been an editor for Stern magazine and for the prestigious weekly Die Zeit. She has published over a dozen books, including a history of family life in Germany (Familienleben in Deutschland, 1980) and a study of resistance during the Nazi era (Vergeßt uns nicht. Menschen im Widerstand 1933-45, 1987), as well as definitive biographies of Annette von Droste- Hülshoff, Hildegard von Bingen, and, most recently, Paula Moderson-Becker. Barbara Beuys lives in Cologne.