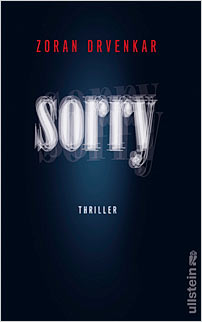 Frauke, Tamara, Wolf and Kris have been friends since their schooldays. Growing up in Berlin without jobs or career, they are now living in a vacuum. Wolf is traumatised by the death of his drug addict lover Erin, Kris, his brother, has just lost his job and with it his dream of becoming a journalist, Tamara has been mentally damaged since giving away her unwanted baby daughter and her best friend Frauke’s mother has been admitted to a lunatic asylum.

Surely, as real a group of losers as one could reasonably hope not to find. Until, in the course of a reckless, drunken evening together, they come up with a brilliant idea: ‘Sorry’ – the agency that apologises on behalf of others. The idea is as simple as it is effective. ‘Sorry’ apologises on behalf of companies who mistreated their employees, or business people who have wronged others. An agent visits the injured party or person, offers an apology, often combined with financial or other compensation. Soon these former deadbeats are living in luxury in a beautiful old villa at the shore of Berlin’s Wannsee. But things can’t last, nor do they, and the spell is broken when Wolf, entering what he thinks is the flat of a certain Mrs Hannef to offer her an apology, finds a dead woman’s body tacked to a wall, its hands and head secured with long steel nails.

From then on follows a sequence of nightmare events impossible to do more than summarise. Frauke dies (accidently, strange to say, though not peacefully). Wolf is buried alive. Fanni and Karl both meet their ends at the hands of Samuel, the ageing leader of a group of paedophiles. Samuel himself is finally kidnapped by Tamara, who leaves him to suffocate in the boot of her car. Add to this an empty grave, tortures, and mistaken identities and you are still not quite there.

Gruesome though it is, this literary thriller addresses serious themes, most obviously the deep harm inflicted by sexual abuse. Born in Croatia, the author was brought up in the West Berlin alternative scene he now describes. Modern literary comparisons certainly come to mind, but surely what one is most obviously taken back to are the grisly horrors of the playwright John Webster.

Zoran Drvenkar was born in Croatia in 1967 and at the age of three moved with his family to Berlin. Since 1989 he has been working full-time as a writer and now lives in a former cornmill not far from the city itself. He is the author of many prizewinning books for children and young adults, including the bestselling Die Kurzhosengang (NBG: Autumn 2006) which he wrote under a pseudonym. In 2003 his psycho-thriller Du bist zu schnell was published and is currently being filmed.

Ullstein Verlag was founded in 1877 in Berlin by Leopold Ullstein, who built up his reputation as a publisher of both newspapers and books. The writers and journalists who were published by and worked closely with Ullstein Verlag in the past include Theodor Wolff, Alfred Kerr, Vicki Baum and Franz Blei. Today the company’s focus is on German and international fiction and non-fiction. After several moves and structural changes Ullstein Verlag returned to the centre of Berlin in 2004. The newly established group Ullstein Buchverlage comprises the imprints Allegria, Claassen, Econ, List, List Taschenbuch, Marion von Schröder, Propyläen, Ullstein and Ullstein Taschenbuch. Ullstein Buchverlage is a subsidiary of the Swedish Bonnier media group.