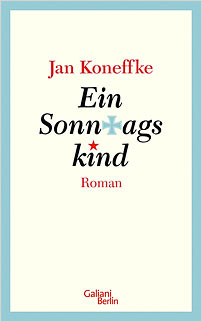 Sunday’s Child is a monumental novel that depicts German history from the Second World War through to reunification. The novel’s protagonist is Konrad Kannmacher, who spends his formative years in Nazi Germany. Konrad survives his ignoble army service through a combination of luck and circumstance, seeming to confirm his mother’s insistence that he is a ‘Sunday’s child’, blessed by good fortune.

After the war Konrad rises from his humble position as a smalltown schoolteacher to become a professor of philosophy at the University of Frankfurt. He lies about his past, suggesting that he was barely involved in wartime hostilities, and his intellectual acrobatics become increasingly convoluted amidst the backdrop of the student protests of the late 1960s. In a sense he remains a lucky ‘Sunday’s child’, managing to escape an embarrassing reckoning with his past within his own lifetime. Inwardly, however, his adult life is racked by fear and shame, dominated by his sense of failure to live up to the standards of the moral philosophy that he himself taught.

Jan Koneffke succeeds in weaving together an original universe of richly-drawn characters whose lives illustrate the long-term consequences of the Second World War for generations of Germans.

Jan Koneffke was born in 1960 in Darmstadt and studied and worked in Berlin from 1981. After receiving a Villa Massimo scholarship in 1995, he lived in Rome for seven years. Nowadays, he spends most of his time in Vienna, Bucharest and Maneciu. Koneffke writes novels, poetry, children’s books and essays; he translates from Italian and Romanian. He has received numerous awards and scholarships, most recently the 2013 Usedom Literature Prize.