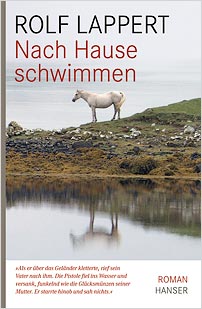 When ten-year-old Wilbur Sandberg visits a fortune-teller she sends him away, appalled by what she has seen. A decade later, a palm reader examines his hand and notes with astonishment that his life line stops short after only five millimetres, restarting after a while and branching into two. Not only that, but his fate line is missing. This novel is Wilbur’s story, the story of a non-swimmer at the mercy of the current, the story of a boy with two futures.

It all really begins on the day the boy stops swimming and tries to drown. When he wakes up in hospital he can’t remember how he got there or what happened. From then on, his story is told in two strands, one beginning with his birth and narrated in the third person with chapter headings and dates from Bruce Willis films (e.g. ‘The First Deadly Sin, 1980’, ‘Die Hard, 1988’, ‘North, 1993’, and so forth), the other with his admission to hospital and narrated in the first person. Both strands proceed chronologically in alternating chapters, eventually converging towards the end of the book, the first tracing his ill-starred birth and early life, the second taking off when he wakes up in hospital and is moved to a psychiatric facility which he nicknames ‘the city of the suicidal’ – from which he discharges himself before throwing himself into a moat at the zoo.

Throughout his whole life, Wilbur’s bad luck seems to have affected everyone around him, but now, at the end of the novel, everything comes right. The loose ends of the story are neatly tied and, as Wilbur tells us, he is finally ‘swimming’. Or is he? The happy conclusion contrasts so starkly with the rest of the book that the reader wonders whether he is inventing the images rather than remembering them. Was the palm reader right? Did Wilbur have the power to make his future take one of two paths? Is there really a choice between swimming and drowning? Both serious and charmingly comic, here is an object lesson in how to live life in a clever and double-edged way.

Rolf Lappert was born in Zurich in 1958 and trained as a graphic artist. He later took a long break from writing and founded a jazz club with a friend. From 1996 to 2004 he worked primarily as a writer of screen-plays, besides contributing to a Swiss television series. He now lives in County Kerry, Ireland.

Carl Hanser Verlag was established by its eponymous owner in 1928 in Munich. Its founder’s interests in both literature and science have been maintained to the present day. The firm publishes fiction and nonfiction for both adults and children. Its authors include Italo Calvino, Umberto Eco, Jostein Gaarder, Lars Gustafsson, Milan Kundera, Harry Mulisch, Philip Roth, Susan Sontag, Botho Strauß, Raoul Schrott, Rafik Schami, Alfred Brendel, Elke Heidenreich and ten Nobel prize-winners, among them Elias Canetti, whose works have been translated into more than twenty different languages.