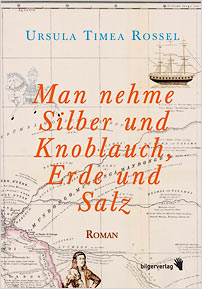 Rossel’s quirky novel is reminiscent of the David Mitchell bestseller, Cloud Atlas: stories within stories, each narrative strand happening in a different time and place, and the ‘reincarnating’ of a character. And the book opens with a bang.

Anyone who is a non-reader is asked to stop before the story begins proper. This narrative voice (whom we later find out has the same name as the author) is struggling to find writing work so she takes an assignment to guard a ‘Schrödinger box’ instead. This is a box with a cat in it, as per Schrödinger’s thought experiment. When she gives in to curiosity and opens the box, a lion jumps out. This is apparently the spur she needs to start work as a ‘crypto-geographer.’ So she goes to Morocco and there she steals a notebook which turns out to be Wigand Behaim’s first draft of his global atlas, an attempt to chart the whole world in all its forms.

From his notebooks, we learn about Wigand’s life and adventures as an atlas maker, travelling to the South Pole to look for Atlantis, meeting the god Atlas and falling in love with Sibylle Blauwelsh. Sibylle is reincarnated, so that she has four different lives: she lives as a self-taught dentist in Switzerland, a camel-herd to a rich man in the desert, with guerilla fighters in the jungle, and with a team making a film about lions in the Himalayas. The final section is an imaginative re-telling of the life of St. Ursula on behalf of the Vatican.

The narrative includes passages where the author is directly addressing the reader or even her characters as though they were real. It also includes letters, extensive notes from Wigand’s atlas, and short descriptions of the different ways in which cultures measure time. It ends with a fake bibliography of books ‘written’ by the characters, such as a book about yaks by a Sherpa from the Himalayan segment. There are often very original nuggets that are only mentioned once, such as when Wigand periodically disappears without explanation and it turns out he is going off to donate ‘time’ at his local time bank.

This book is more about the telling of stories and adventures than an attempt to have a clear structure and plot. The themes of time and place and how they interact run through the entire book. A wonderfully original tour de force.

‘An overwhelming book that whistles around your ear like wind suddenly passing by.’– Peter von Matt was born in 1975 in Thun, Switzerland, and now lives in Olten. She worked as a journalist and editor on numerous publications, writing articles, reports and satirical texts. Since 2006 she has been a freelance author.

Bilgerverlag was founded in 2001 by Ricco Bilger and specialises in contemporary Swiss literature. Authors include Katharina Faber, Urs Augstburger, Kaspar Schnetzler, Urs Mannhart, and Christoph Simon. Ricco Bilger opened his Zurich bookshop in 1983, and ten years later, another bookshop in mountain spa town of Leukerbad, where he went on to found the successful Leukerbad Literature Festival. In 2007 Bilger was the driving force behind the formation of SWIPS, the forum for Swiss Independent Publishers.