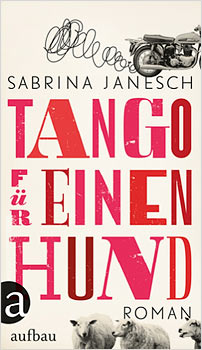 Award-winning author Sabrina Janesch’s third novel is a bizarre and hilarious road-trip through the German wilderness, and is full of word-play and wit.

Ernesto Schmitt is a precocious seventeen-year-old with a colourful life story. He spends his time fantasising that he lives in the Wild West rather than a small town in Northern- Germany. Ernesto has just left school and has received a preliminary letter of acceptance from a film academy. But instead of spending his summer researching and making short films featuring the girl he has a crush on, he is stuck working off 200 hours of community service – having taken the blame for an explosion at the local mill that was actually caused by the girl.

Ernesto is visited unexpectedly by his long-lost uncle Alfonso from Argentina, who has a humongous Uruguayan sheepdog named Astor in tow. Alfonso dreams of entering Astor in an important dog show near Hamburg, nearly 200 miles away. Thus they set off on a farcical odyssey through the moors in a beat-up borrowed car, dodging the police (Ernesto is clearly violating the conditions of his parole) and encountering an initially threatening neo-Germanic tribe.

Along the way, Ernesto learns the true story of his father’s youth in Argentina, and Alfonso discovers that he is not even German, as he had thought. Despite missing the dog show, Ernesto meets the girl of his dreams and manages to get his uncle to the airport in time for his flight back to Argentina.

While by no means young adult literature, Tango for a Dog has a vibrant youthful feeling and may remind readers of Wolfgang Herrndorf’s Why We Took the Car. Instead of following the well-known teen road-trip plot, however, Janesch subverts the genre by turning the book into a chance for Ernesto to bond with his eccentric uncle and for two generations to discuss their shared past.

Janesch received critical acclaim for her debut novel Katzenberge from none other than Günter Grass himself, and has already secured her place as one of the best writers of her generation. Her latest novel is a literary but infectious page-turner full of odd and sympathetic characters (as well as a dog sure to win you over), which will appeal to the young and wild at heart.

Sabrina Janesch was born in 1985 and studied creative writing, cultural journalism, and Polish studies. Her novel Katzenberge was awarded the Mara-Cassens-Preis for best debut novel, the Nicolas-Born- Fördererkreis and the Anna Seghers- Preis. In 2012, her second novel Ambra was published.