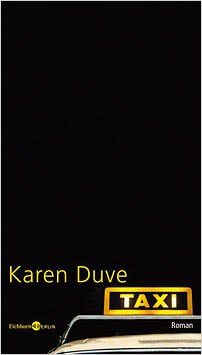 ‘Please, Alexandra,’ groans the mother of Karen Duve’s taxi-driving protagonist, ‘spare us your dreadful stories.’ The object of this plea, Alexandra (Alex) Herwig, becomes a taxi driver for want of a better plan. She responds to a small ad that specifically asks for female drivers, and while her school friends embark on their second year at university, Alex becomes ‘Twodoublefour’, ferrying theatregoers, magazine editors, prostitutes, pimps and drunkards in her battered Mercedes. She can’t remember street names and she can’t stand most of her passengers, but, crucially, she has a thing about money – real notes and coins with their own particular smell. Unlike the other drivers, she rarely stops for breakfast because she doesn’t want to miss out on the cash.

The first part of the novel covers episodes from her experiences – the man who offers her 500 marks in return for ‘touching her knee’, the racist couple who refuse to be driven by foreigners, the drunkard who falls into the back seat of the taxi without any cash. But the tales of fare-dodging, violent, lascivious and irritatingly loquacious passengers are nothing compared to the descriptions of the other drivers, most notably the pretentious Dietrich and his misogynistic admirer, Rüdiger, who lectures Alex at every opportunity on the inferiority of women. Bafflingly, Dietrich becomes Alex’s boyfriend – though usually they are both too exhausted to have much sex. That privilege is reserved for Marco, a vertically-challenged former classmate.

Five years later things come to a head when she picks up a mean-looking character with a pet chimpanzee and decides to rescue the monkey. The incident ends with taxi no. 244 veering off the road. The car is a total write-off, which means the firm can claim on the insurance, thereby saving the debt-ridden business. The novel ends with Alex losing her licence and making her way to Marco’s apartment.

Taxi shows Duve back in top gear. It has verve, stylistic flair and characteristically dark humour, and each of its 113 short chapters has the pace and impact of a short story, but within the context of a novel. It is also completely authentic, Duve herself having been a taxi driver in Hamburg for thirteen years. Our advice? Hail it! It’s well worth the fare.

Karen Duve was born in 1961. She once worked as a taxi driver and now lives near Hamburg. She was awarded a scholarship from Ledig House in New York and has received several literary awards including the Bettine von Arnim Prize. Her critically acclaimed first novel Rain was translated into fifteen languages.

Previous works, and translations thereof, include:
Regenroman (Rain), 1999; Dies ist kein Liebeslied (This Is Not a Love Song), 2002; Die entführte Prinzessin, 2005 – all Eichborn.

Eichborn AG was founded in 1980, and is one of the few independent general publishers still operating in Germany. Its strong and diversified list includes fiction and non-fiction, humour and reference books. It has two subsidiary lists: Die Andere Bibliothek (‘The Other Library’), founded by Hans Magnus Enzensberger, and Eichborn Berlin, which focuses on literary debuts in German. Many titles originally published by Eichborn have been translated into English, including W.G. Sebald’s The Emigrants and The Rings of Saturn; A Woman in Berlin by Anonymous (winner of the 2006 Schlegel-Tieck award); Karen Duve’s Rain; Walter Moers’ The 13½ Lives of Captain Bluebear and Jan Costin Wagner’s Ice Moon.