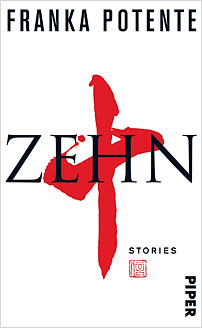 US-based film actress Franka Potente’s ten stunning short stories about Japan look at ordinary people in ordinary situations, focusing on Japanese life caught between tradition and progress; it is a country she visits frequently and about which readers are increasingly curious. Ten is a masterly first book, varied in tone and nuanced in style.

In one of the longer stories, a lonely widower is mourning his dead wife and finds himself an imaginary friend, André the Giant, a Polish-born wrestler now living in Florida. He saw André on the old TV set given to him by a friend. Perhaps the illusion is the result of the last stages of inoperable cancer from which the old man is suffering, but André is a real, large and consoling presence to him, and seems to keep him company as he dies after taking the little suicide pill given to him by a friendly pharmacist. Then there is the comic story in which a young married couple accidentally mix up some presents and give the vibrator intended for the wife’s sister on her birthday to the husband’s boss at a dinner party. The boss’s wife helps them to save face by explaining to her bemused husband that it is a massage aid for the back of the neck, just the thing to relax him after a long day at the office.

The influence of Western culture on modern Japan is pervasive. A husband is keen for his pregnant wife to listen to Western music and read Western books, the idea being that the unborn baby will absorb cultural knowledge that way. However, it won’t matter so much if the ultrasound scan shows a girl baby, since he and the rest of the family all want a boy. But the expectant mother thinks it will be a girl and, with instinctive feminism, decides that if so she will call her daughter Junko, after a well-known Japanese female mountaineer, and like her namesake she will be a strong, vital, capable woman.

The reader’s initial impression is of a series of Japanese miniatures, simple and written in a spare style well suited to the genre. But soon one realizes that Potente is looking at subtleties of interaction between modern Japan – still preserving its traditions of etiquette and polite reserve – and the perceived and often real advantages of Western society and culture, which the Japanese are also in some respects anxious to make their own.

Franka Potente was born in 1974. Since playing the lead role in Tom Tykwer’s film Run Lola Run, she has become one of the most sought-after German actresses worldwide. She also appeared in The Bourne Identity and its two sequels, as well as in the film adaptation of Michel Houellebecq’s novel Atomised. Potente first visited Japan in 2005 to film a documentary on ‘Underground Art’ in Tokyo and has returned there several times since. She now lives in the USA.

Piper Verlag was founded by Reinhard Piper in 1904. The firm published many leading contemporary authors, a tradition followed by his son and his grandson. After 1945 the programme expanded to include philosophy and non-fiction. Piper Verlag is well known for its lists in German and international fiction and non-fiction. Authors published by Piper include Ingeborg Bachmann, Sten Nadolny, François Lelord, Arne Dahl, Hape Kerkeling, Sándor Márai, Paul Watzlawick, Markus Heitz and Ferdinand von Schirach. Piper Verlag has been part of the Swedish Bonnier Group since 1995. In 1996 the Piper publishing group acquired the imprint Malik Verlag (literary travel writing, adventure, mountaineering), and since 2002 Piper’s list has been further enriched by the addition of high quality fantasy literature. Piper acquired the imprints Pendo (commercial fiction and non-fiction) and Westend (non-fiction) in 2008.