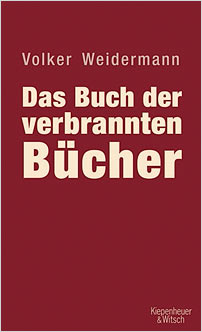 On 10 May 1933, the Nazis’ nationwide ‘Action against the un-German Spirit’ climaxed in a symbolic act to ‘cleanse’ German literature from un-German and ‘degenerate’ works. Bonfires were set up throughout the country and SA members and right-wing students threw thousands of books into the flames. One of the largest crowds gathered at Opernplatz (now Bebelplatz) in Berlin, where highranking Nazi officials – including Propaganda Minister Joseph Goebbels – supervised proceedings and announced the names of the works and authors who were never to be heard of again. Now Volker Weidermann, born in 1969 and currently literary editor and head of features at the Frankfurter Allgemeine Sonntagszeitung, resurrects these authors and their works, and in doing so offers us an insight into twentieth-century German literature before and during World War II.

This is a formidable task, for the survey covers all 131 of the black-listed authors: ninety-four German-speaking and thirty-seven foreign-language writers – including Ernest Hemingway, Jack London and Upton Sinclair. It can also, as Weidermann admits in his foreword, be wearisome, since the Nazis did almost succeed in some cases in wiping authors – whether Jewish, homosexual or in any other way unacceptable to the Nazi spirit – and their more or less extensive oeuvre from the literary stage for decades to come.

Sensibly enough, Weidermann economises on the space he gives to well-known writers whose fortunes have already been well-documented – Lion Feuchtwanger, Stefan Zweig, and Erich Maria Remarque, for example – in favour of some who seem in danger of vanishing into obscurity – Rudol Braune, Maria Leitner, or Bernhard Kellerman, to name but a few. The creation of Wolfgang Herrmann’s notorious black list condemned so many writers to exile, death in concentration camps or suicide. Fortunately, some managed to flee Germany in time, although not always to survive. A few stayed behind, like Erich Kästner, and remained silent. Others adapted to the new regime and even became successful. Such were Waldemar Bonsels, Viktor Meyer- Eckhardt and Erich Ebermayer, who ended up one of the best-paid Nazi film authors.

Following up on an earlier success on post-1945 German literature, Weidermann has produced not only a scholarly compilation but also an accessible, anecdotal, highly readable book about a period that affected writers and readers all over the world.

Volker Weidermann was born in 1969 in Darmstadt. He studied politics and German language and literature in Heidelberg and Berlin. He is the literary editor and head of the Feuilleton section of the Frankfurter Allgemeine Sonntagszeitung and lives in Berlin.