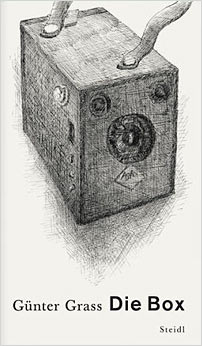 In his controversial autobiography Peeling the Onion (2006), Günter Grass described his life between the ages of twelve and thirty, before he had achieved worldwide fame as a writer with The Tin Drum. Now, in Die Box, he finds a means of continuing the narrative from the early 1960s to the early 1990s through the involvement of his eight children from four different relationships.

They are cunningly introduced as semi-fictionalised puppets yielding to their father’s eightieth birthday wish that they should gather to record on tape their collective impressions of him. By standing back in this way from his own autobiography, Grass manages to distance himself from his monumental public image as a political campaigner and writer of contested fiction. Claiming that his children are, like it or not, part of his life and character, he emphasises instead the most private part of his life and, in nine short chapters, opens it up to the public gaze. Disappointments, jealousies and feelings of neglect are chalked up by his progeny against a father who was often away or otherwise absented himself on account of his compulsion to write. A general family harmony is, however, in evidence, and ascribed to the influence and friendship of quirky photographer Maria Rama, to whom this book is dedicated.

Her camera is the ‘box’ of the title, endowed with some magical qualities in the telling and portrayed as a bridge between father and children. Maria, muse, friend, comforter, is a strong female figure in the tradition of those in his 1977 novel, The Flounder. She is the real hero of his literary autobiography and renders this most public of authors peculiarly accessible, human and sympathetic.

Günter Grass, born in 1927 in Gdansk, Poland (formerly Danzig, Germany), studied art in Düsseldorf and Berlin after a period of military service and subsequent captivity by American forces. From 1956-1960, he worked as a graphic artist, writer and sculptor in Paris before his novel The Tin Drum brought him international acclaim. Grass moved to West Berlin and became active in politics, ghost-writing for Willy Brandt, the Social Democrat leader, who was elected chancellor in 1969. Grass has published many books, and has often produced the graphic art for them himself. His awards include the Gruppe 47 Prize (1958), the Büchner Prize (1965), the Antonio Feltrinelli Prize (1982), and the Nobel Prize for Literature (1999). The author’s work has been published in 51 languages.

For detailed information about Steidl Verlag please contact the editor.