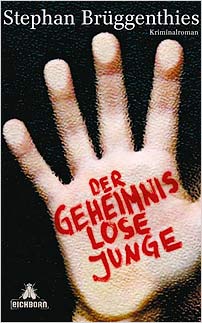 Chief Inspector Zbigniev Meier’s first case is gripping, the writing pacy, the premise chilling, the tension sustained – gritty, sexy (he has an insatiable girlfriend), frightening. This is a great discovery for aficionados of crime.

Our sleuth is thirty-seven-years-old and based in Cologne. Timo Linden, son of a famous architect, has gone missing. Just fifteen, and a pupil at a school for talented students, ambitious, passionate about classical music, good at chess, he seemed to have a rosy future before him. Only one thing strikes Zbigniew when visiting the family home: why does the boy’s room have no door? Is it privacy he is seeking, or is the mystery deeper-seated?

A young boy’s dead body is discovered in Turin. Zbigniev travels to Italy to investigate. The victim has been sexually abused and the police find a map of France drawn on his back. The boy is not Timo, but could the cases be connected?

Back in Germany, Zbigniev is plagued by his aching back and his girlfriend Lena’s demands. She doesn’t care much for his work, but when he tries to explain his current case she says she knows one of Timo’s friends. At last, a real clue. He discovers that Timo secretly kept a mobile phone used solely for texting a particular number in France. When he discovers the boy’s encoded diary the hunt is well and truly on, leading the chief inspector first to a little French village, then to the Château d’Amour which turns out to be a castle of utter horror worthy of the Marquis de Sade. It is also, as Zbigniev discovers, a hotbed of paedophilia where Timo is just one of many teenagers being held captive. In a hair-raising dénouement, the C.I. is able to free Timo and three others, but he is unable to save everyone and one of the kidnappers escapes. Back in Cologne, Zbibniev starts to comprehend the immensity of the case which reaches into the highest political circles of the city.

The German readership has been avidly anticipating this first novel by one of the writers of the successful crime series Tatort – they won’t be disappointed and nor will readers abroad. The plot grips from the first page to the last, and the author emerges as an exemplary new voice in a highly competitive genre.

Stephan Brüggenthies was born in Münster in 1968 and studied music, German and business management before working as a journalist in the music and film industries. After further studies at the Baden-Württemberg Film Academy he wrote and produced many awardwinning short films. Since then he has worked as a scriptwriter for the hugely successful German ARD channel’s crime series Tatort. He lives in Cologne. This is his first novel.

Founded in 1980, Eichborn is regarded as a young and bold independent publishing house. Its strong and diversified list includes fiction, non-fiction, humour, and reference books. Books originally published by Eichborn include: W.G. Sebald’s The Emigrants and The Rings of Saturn; A Woman in Berlin by Anonymous (winner of the 2006 Schlegel-Tieck award); Jenny Erpenbeck’s The Old Child and Book of Words; Walter Moers’s The 13½ Lives of Captain Bluebear and Jan Costin Wagner’s Ice Moon.