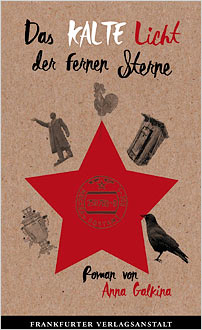 The Cold Light of Distant Stars is a bittersweet memoir of growing up in the Soviet Union during the 1980s. Anna Galkina conveys all the ugliness of daily life in Soviet Russia – the humiliations, the chronic deficit of any product you can think of – as well as indulging in nostalgia for the little joys of a vanished past. Bursting with humour as well as tragedy, this powerful book gets under your skin.

This is the coming-of-age story of a young Soviet girl during the 1980s and ‘90s. Living with her grandmother and mother, Nastja grows up in a shabby small town near Moscow in the post-Cold War, pre-Gorbachev period. In her fresh, fearless voice, Nastja recreates her everyday life with all its deprivations and pleasures. She describes the obligatory morning physical exercises at kindergarten, the cruel punishments for leftover food, the constant shortages at home and working on the production line at the local bread factory. It is a harsh and now distant world, where people regularly fight over the last piece of butter in the supermarket. Nastja celebrates both the humanity and the absurdity of her fellow citizens: women are tough and fearless, men are obsessed with sex, and nearly everyone has a drinking problem. Nastja’s mother, the proud founder of the town’s poetry club, is constantly on the lookout for an ‘intellectual’ man to marry, and ends up with a Latvian farmer. Nastja’s first love – a Georgian deserter called Dima – wants to elope with her. Anatolji becomes Nastja’s parttime lover for his access to luxuries such as salami, orange juice and aspirin.

Galkina’s writing is poetic, evocative and amusing, enriched by her fluency in both Russian and German. Her dry humour provokes funny episodes and laugh-out-loud situations. Through Nastja’s wry observations we learn about the history of the Soviet Union during the 1980s and ‘90s, as well as about an adolescent struggling with universal teenage problems. When the family eventually sell all their belongings and move to Latvia, Nastja feels like a traitor and starts to appreciate the uniqueness of what she has left behind.

The Cold Light of Distant Stars is the Russian-German equivalent of Jonathan Safran Foer’s Everything is Illuminated, Elene Gorokhova’s A Mountain of Crumbs or Frank McCourt’s Angela’s Ashes. Anna Galkina has an original, vibrant, and colourful voice and her debut novel deserves to be widely read.