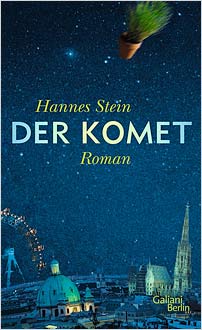 Hannes Stein’s deadpan introduction to The Comet states that, ‘the novel takes place in Vienna and on the moon.’ His narrative combines the best bits of Douglas Adams and Jules Verne with some good old-fashioned romance to produce a hugely entertaining book that deserves to be on everyone’s reading list this season.

In Stein’s fictional universe World War I never happens, because the Austrian Archduke Franz Ferdinand decides to leave Sarajevo in 1914 after the first unsuccessful attempt on his life. As a consequence, the Austro-Hungarian Empire turns into an enlightened multi-ethnic commonwealth, and Hitler and Stalin remain provincial mediocrities who never rise to power. World War II does not happen either and so Central and Eastern Europe do not lose their Jewish population in the gas chambers and their intellectual elite (whether Jewish or not) to the United States. In Stein’s topsy-turvy world Europe is still a scientific and cultural powerhouse at the beginning of the 21st century. But not everything in Stein’s novel is weird and wonderful: just as in the real world, here too a young man foolishly falls in love with a passionate older woman; a husband is being cuckolded while he’s away on a Very Important Assignment; and a French philosopher explains the world to the rest of us.

The foolish young man is called Alexej von Repin; the lusty older woman, Barbara Gottlieb. While Barbara’s husband, David “Dudu” Gottlieb, is away on a scientific mission to the moon, a bittersweet affair ensues between Alexej and Barbara, which both of them know will have to end once Barbara’s husband returns. What they don’t know is that not only their affair but all life on Planet Earth will soon come to an end, because the reason Dudu Gottlieb has been called to the moon is that an enormous comet is heading straight for Earth and will destroy absolutely everything on impact.

Meanwhile, a pair of eminent scientists is becoming deeply troubled by patients who are plagued by nightmarish visions of Europe being torn asunder by war and genocide… Stein’s intelligent and witty book is suffused with a deep sadness at everything Europe lost in the cataclysms of the first half of the 20th century. Will there be a happy ending for Alexej and Barbara? Will the world really come to an end? How will the French philosopher react to news of imminent total annihilation? There’s only one way to find out: read this wonderfully diverting novel!

Hannes Stein was born in Munich, grew up in Austria, and has been living with his wife and child in the United States since he won the green card lottery. In addition to his work as a culture journalist for various media outlets (FAZ, Der Spiegel, Die Welt – whose NY correspondent he currently is), he has written several non-fiction books, including Endlich Nichtdenker (Non-Thinker, Finally!), Immer Recht haben! (Always Be Right!) and, together with Norman Manea, Gespräche im Exil (Conversations in Exile).