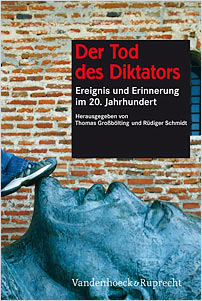 Each of the fifteen contributions in this landmark collection of essays contains illuminating insights into a particular culture and society, focusing on the historical and political significance of the symbolic and physical deaths of dictators around the globe.

Stretching from Napoleon to Saddam Hussein (but with an emphasis on the twentieth century), each essay reads as an individual case study in the mechanisms of power that both sustain and lead to the downfall of dictatorial regimes and the men who lead them. Accumulatively, these fascinating descriptions of authoritarian (or even totalitarian) rule highlight the fragile nature of power, even in those regimes where the dictator appears to have an iron grip on society and politics. Several of the essays highlight the many ‘deaths’ of the dictator: the symbolic death resulting from their removal from power as well as their physical death, often long after dictatorial rule has ended. From the usurping of Lenin’s political authority during his protracted period of ill health, to the embalming of Ho Chi Minh against his express wishes, the essays in this collection suggest that political power relies to a large extent on the construction of symbolic power.

The contributors analyse not only the historical and biographical details surrounding the rule of these authoritarian leaders, their assent to power and their political and bodily demise, but also the myths and cults of personality that developed around them. The authors demonstrate that these myths were, in many ways, as important for the maintenance of dictatorial power as were the violent treatment of opponents and the fear engendered in the rest of the population. The essays consider the ways in which these myths are sustained after the physical death of the dictator and how they continue to serve the political interests of the successor regime. Particular highlights of the book are those moments when the authors give an insight into the man behind the dictatorial mask.

Bringing together a wide range of different contexts which point towards many parallels in the deaths and afterlives of dictators, The Death of the Dictator will appeal to a wide readership. Many of the contributions are likely to be of particular interest to British and American readers wanting to find out more about their own nation’s involvement in the maintenance or toppling of dictatorial rule.

Thomas Großbölting is a professor of Modern History at the University of Münster.

Rüdiger Schmidt is a research assistant in the History Department of the University of Münster.

Thomas Großbölting is a professor of Modern History at the University of Münster.

Rüdiger Schmidt is a research assistant in the History Department of the University of Münster.

One of the oldest independent publishers still in existence, the Göttingen firm Vandenhoeck & Ruprecht has been publishing academic literature since 1735, and now issues over 250 new titles a year. The classical core of the list consists of academic works in the fields of theology and religion, history, medieval studies, philosophy and philology. Equally important is the firm’s developing range of practical, do-it-yourself titles – on personal development, psychological counselling, spiritual community work and much else – which are both useful and highly readable.