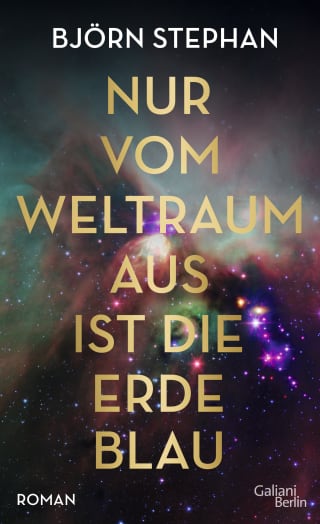 The Earth is Only Blue from Space is a coming-of-age novel set in the 1990s in a New Town development in the former East Germany, where three teenagers grapple with their identities and futures in a society deeply shaped by its past.

Björn Stephan’s debut offers a literary glimpse into a uniquely fascinating period in recent European history. The story opens and closes in the present day, but most of it takes place shortly after German reunification. The setting is Klein Krebslov, a development whose streets are named after prominent East Germans, now all but forgotten. Sascha, Juri, and Sonny are three gifted misfits exploring their emotions and relationships with a varied cast of adults, all adjusting to life in a new old country.

Sascha records his daily life in a notebook, where he also notes down his collection of unusual words in other languages. Perceptive and nerdy, the lonely teenage Sascha observes the people in his life: his lying parents, Carola and Bodo, who often fight; his little sister, Nina; a sixty-something acquaintance, Mr Reza, who speaks in riddles and comes from Iran; his Elton John–obsessed pianist friend, Ronald (Sonny) Sonnenberg; and Juri, the friend with whom he eventually falls in love, who starts out as the brainy, freckled, headscarf-wearing new girl in class but soon becomes a close friend. Juri dreams of escaping Klein Krebslov for outer space.

The story becomes a caper of sorts, as Juri and Sascha try to find out why Mr Reza has been beaten up by a pair of thugs and then track down who set the thugs’ car on fire, burning Sascha’s family car in the process. Each plot twist teaches Sascha something new. The vivid, colloquial language, peppered with the foreign terms Sascha is collecting, wonderfully captures the teens’ experiences. English-language readers will relate to the classic adolescent issues of belonging, discovery of self, and family conflict. In the end Sascha, Sonny, and Juri all go their separate ways, while also recognizing they would never have found themselves without one another.

Björn Stephan’s book is reminiscent of Michelle Falkoff’s Questions I Want to Ask You (2018), and Adam Jacot De Boinod’s I Never Knew There Was a Word for It (2010). The personal elements and growing pains are timeless, whereas the political content is all too relevant, as right-wing movements and deindustrialization continue to influence the current world.

Björn Stephan was born in 1987. As a reporter he writes for DIE ZEIT and occasionally for SZ Magazin. He has received numerous awards for his reporting , including the German Social Award, the Axel Springer Award and the German Reporter Award. Nur vom Weltraum aus ist die Erde blau is his literary debut.