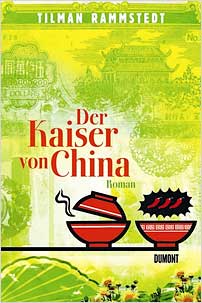 Germany has already taken notice of Tilman Rammstedt’s third novel by awarding its author the renowned Ingeborg Bachmann and Annette von Droste Hülshoff literary prizes, and it is easy to see why. From its attention-grabbing first sentence Rammstedt guides the reader by the hand through a narrative which is both comically fantastical and heartwrenchingly insightful.

Our first introduction to the novel’s narrator, the somewhat absurdly named Keith Stapperpfenning, finds him ensconced beneath his desk where he has been hiding for the past ten days and intends to remain for the next two weeks. The reason for his ensconcement is in tune with his erratic character. He has been nominated by his siblings to accompany their even more eccentric grandfather on a trip to China to which the old man has elected to travel in celebration of his eightieth birthday. Keith dislikes this choice, proceeds to blue the money donated by his family, and leaves the old boy to set out by himself. But his plans are knocked sideways when he receives a phone call from a pathologist in the Westerwald mountains informing him that his grandfather is dead.

So far, so intriguing, but we are still only at the start of things. Still under his desk, Keith concocts the idea of convincing his siblings that he was with his grandfather all along, and begins to write them long and lively letters from China which, from then on, are intertwined with the ‘real’ tale.

It is in the alternative reality of these letters that the grandfather comes to life, cantankerous, stubborn, always demanding to be in the right. In his youth, we discover, he was a juggler in a Chinese circus group in Germany, and there fell madly in love with the elusive and hugely obese ‘World Sensation Lian’. This poor lady, crammed daily with fattening foods, was actually dying but still nursed her greatest wish, which was to perform successfully on the tightrope. And this feat she almost achieved before crashing to the ground and her death.

The novel meditates on the nature of memory and truth, leading both the reader and Keith to the conclusion that even a fantasy can become real if the mind wishes it strongly enough. Astonishingly inventive (only the barest outline is given here), it leaves one wondering what this amazingly fertile author will think up next.

Tilman Rammstedt was born in 1975 in Bielefeld and now lives in Berlin. DuMont published his debut novel Erledigungen vor der Feier in 2003 as well as it’s successor, Wir bleiben in der Nähe, in 2005. Tilman Rammstedt has received the Open Mike award, the Rheinische Kulturförderpreis, the New York stipend of the Kulturstiftung der Länder, the Kassel Literaturförderpreis for grotesque humour and the Literaturförderpreis of the State of Nordrhein-Westphalia, both the Ingeborg Bachmann Prize and the Audience Award at the Days of Literature in Klagenfurt, and the Annette von Droste Hülshoff Prize.

Translated editions of previous works have been published in:
France and Hungary.