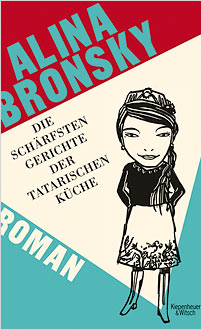 Bronsky’s first novel, Broken Glass Park, was described by Publishers Weekly as a ‘riveting debut’; her growing fanbase will not be disappointed with this moving and sparklingly funny follow-up.

Rosalinda is the best grandmother in the world, not to mention the best mother, wife, hostess, organiser, and bestlooking woman ever. What is more, she is a Tartar who grew up in an orphanage, lives in the Soviet Union, and knows how to look after herself. Her husband Kalganov is sadly inadequate, as is her daughter Sulfia. The one fails to abuse his position as a worker’s representative to Rosalinda’s satisfaction; the other is ‘scrawny’, timid, and far too sensibly dressed. Both live in mortal fear of the monstrous Rosalinda, who can’t understand why no one appreciates her ‘help’.

At last, when seventeen-year-old Sulfia gives birth to a daughter, Rosalinda finds someone worthy of her efforts. Rosalinda soon takes over the little girl Animat’s upbringing and everything – of course – goes swimmingly until one day Sulfia moves out of their shared apartment and takes her child with her. A monumental battle between the two over Animat begins in earnest.

Only Rosalinda overdosing on sleeping pills prevents Sulfia and Animat from leaving the country altogether, and Rosalinda then decides that Sulfia must marry a foreigner so that she, Sulfia and Animat can experience a ‘better life’. She settles on Dieter, to whom Sulfia has taken a liking, but Dieter is more interested in the pretty but pre-pubescent Animat. The magnificent Rosalinda’s intrigues lead to the successful relocation of the three members of the family to Frankfurt and she exploits Dieter’s interest in Animat as a means of securing his marriage to Sulfia. In Germany, Rosalinda rediscovers her youth, but this proves to be at the expense of Sulfia’s health and Animat’s wellbeing.

In this hilarious tale, we encounter themes of food shortages and corruption that locate it unmistakeably in the Eastern bloc, but the true strength of Bronsky’s novel lies in the larger-than-life first-person narrator Rosalinda, who exerts the same fascination over the reader as over her unfortunate family – the reader, though, has the privilege of being able to laugh. The writing is smart and pithy, full of sentences that perfectly and comically turn against themselves, confounding the reader’s expectations. Dazzling.

Alina Bronsky, born in 1978 in Yekaterinburg, Russia, spent her childhood on the Asiatic side of the Urals and her youth in Germany. She now lives in Frankfurt with her family. Widely acclaimed by critics, her debut novel Broken Glass Park became a bestseller and has been published in the U.S. to rave reviews. Der Spiegel has heralded Alina Bronsky as ‘the season’s most exciting newcomer’.