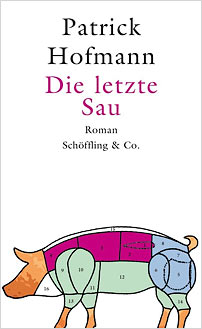 Twenty years after the Berlin Wall came down, literature and other cultural products from the former East Germany still heavily bear its imprint. In the English-speaking world, two of the most successful German films in recent years can be said to carry a ‘Made in the GDR’ stamp. Little is known, however, of the modern realities of the former GDR. The fate of the ordinary people who went from ‘real existing socialism’ to the brave new world of free market capitalism overnight has been largely hidden from view.

How refreshing, then, to read Patrick Hofmann’s Die letzte Sau, ostensibly a family drama in a small village outside Leipzig in the early 1990s, but one in fact which tackles wider political and economic themes without ever losing its humane core.

From multiple viewpoints, Hofmann introduces the reader to the three generations of the Schlegel family, from paterfamilias Albrecht, eighty-three-years-old and a survivor of Depression, war, Fascism and Communism, to grandson René, who is on the cusp of adulthood just as the certainties of adult life in his part of the world are crumbling. Most other families have already left the area as the once mighty coal industry falls victim to ‘modernisation’ and the diktats of free marketeers from the West. But the Schlegels are determined to stand their ground just a little bit longer, at least for the annual slaughter of one of their prized pigs – the signal for a family reunion.

Hofmann captures with precision and acuity the interaction and tension between the rural and the (post-) industrial in the Schlegels’ rhythms and rituals as timelessness rubs shoulders with a specific historical moment when, in Marx’s famous phrase, ‘all that is solid melts into air’ and ordinary people struggle to maintain their dignity amid uncertainty and disruption. The characters, from crotchety Albrecht to his fretful daughter Sonja and her hard-drinking husband Achim, are lent an unsentimental humanity. Humour becomes part of their defence mechanism against a world they increasingly struggle to understand.

For too long, East Germans have been cast as either tarnished Stasi informers or boozy neo-Nazis in the wider imagination. This novel offers a perfect opportunity for an enterprising publisher to paint a fuller picture. Dramatic, engaging, provocative and wise, it captures the imagination until long after the pig has squealed its last.

Patrick Hofmann was born in 1971 in Borna, growing up and completing his Abitur exams in the GDR before the Berlin Wall fell. He studied philosophy, German and history in Berlin, Leipzig, Moscow and Strasbourg, and has lived in Athens since 2002. He has worked as a freelance journalist and translator, and in 2008 had some of his short stories published in Sinn und Form. Die letzte Sau is his first novel.