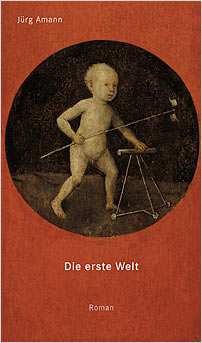 This beautiful little book recalls an untroubled rural childhood in Switzerland and takes the form of an elegy for the narrator’s mother. Jürg Amann’s vividly evocative text forms a companion to an earlier title in which he explores the darker side of growing up.

Three days before the narrator’s mother dies, he asks her what she sees. ‘You playing,’ she replies. ‘You and your brother, in the garden, in front of our house.’ He sees it too, the brothers playing in the gravel and in the meadow, under the plum tree and the greengage tree. And he hears her voice calling to them, after the ‘endless days,’ again and again. Those endless days become the substance of the novel.

The garden is the centre to which everything returns. The narrator reconstructs the architecture of the garden, peopling it with the figures, objects and events from his early years: the sandpit in which he and his brother dug to Australia, where they had heard that the people were upside down; the trellis of peach trees; the lawn of flowers; and the intricate, gravity-based irrigation system that kept the trees and flower beds watered. He remembers his mother bringing cakes to them outside, and playing football with their father, learning all the trick shots until night fell and their mother called them in. He also recalls the other world of the street outside, playing cowboys and Indians with the children from the neighbouring houses.

The endless days take in memories of church, of the circus with its awful clowns, the fairground’s merry-go-rounds and shooting ranges, and the holidays swimming in Lake Maggiore, when their father would wade in up to his waist, holding them by the hand, and then gradually let go without their noticing. Creeping into these idyllic memories are images of death: the runaway horse that careered down the hill and died in a pool of its own blood while its owner looked on and wept; the childhood pets devoured by cats; and the boy who drowned in the well.

In the end we return to the narrator’s mother calling him and his brother back to the house, before she too is called: out of her house to her final home, to join her husband who is there already. Original and touching, The First World would be a pleasure to translate – and to read in translation.

Jürg Amann was born in 1947 in Winterthur and studied German Philology in Zurich and Berlin. He worked as a literary critic and dramatic advisor and was a freelance author from 1976. His texts have been awarded several prizes, including the Ingeborg Bachmann Prize, the Conrad Ferdinand Meyer Prize and the Schiller Prize. Jürg Amann died on May 5th 2013.

Founded in 1996, Nimbus is situated in the ‘Villa zum Abendstern’, the location of Robert Walser’s Der Gehülfe (‘The Assistant’). According to the literary tradition of the house, Nimbus publishes titles of contemporary authors as well as texts by famous Swiss writers like Robert Walser, Friedrich Glauser and Ludwig Hohl. An important branch of the programme are books by photographers like Barbara Klemm, Stefan Moses, Erich Lessing and Peter Nadas. Furthermore, Nimbus has published important titles in art history, including the history of the Paul Cassirer Gallery Berlin and the biography of the art dealer Alfred Flechtheim.