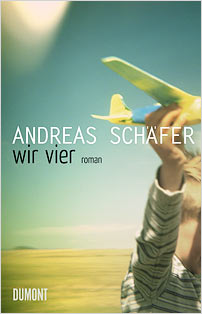 Jakob Wilber was murdered as a young man, apparently as the result of a disagreement in a pub, though the reader never discovers the truth of the matter. His murderer, Kai Vogler, is serving a life sentence – but knowing that the culprit is behind bars does nothing to alleviate the Wilber family’s own life sentence. They lead lives muted by their own suffering, which they cannot share, instead trying to hide from their agony by gliding, gardening and even – in the case of Merten – denying the existence of his dead brother.

In this family that is being eaten up by grief and silence, it is the mother, Ruth, who finally decides to take action. Behind her husband’s back, she writes to request a prison visit. Lothar finds the reply, offering her a date and time, in the glove compartment of her car but, typically, says nothing.

However, there is a kind of redemption at the end. Ruth finally confronts her son’s murderer and, no longer tormented by dreams of him, begins to feel that she can move on with her life, and Merten and his father discover that they had more in common than they imagined. So the unspeakable wound starts to heal as they feel able to say things like: ‘Jakob would have liked that.’

Subtle, poetic and full of insight, The Four of Us is highquality literary fiction and the agony endured by the characters in the book lives on in the reader’s mind. Devoid of sentimentality, this novel skilfully addresses subject matter that is difficult but of universal interest.

Andreas Schäfer was born in Hamburg in 1969. He grew up in Frankfurt am Main and now lives with his family in Berlin, where he writes articles and theatre reviews for the daily newspaper the Tagesspiegel. Schäfer received the 2003 Bremen Literature Advancement Prize for his first novel Auf dem Weg nach Messara.