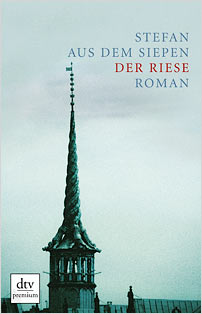 By the time he is fifteen, Tilman Wölzinger is 1.99m tall; at eighteen he measures 2.12m. When he dies, aged just thirty, he has reached the lofty height of 3m. Tilman is a well-behaved and largely unremarkable child except for his extraordinary height and a passion for music which baffles his parents. His father’s roofing business has been in the family for generations, and it is assumed that Tilman will take over. Tilman acquiesces to his fate, leaving grammar school early to start working in the firm.

Tilman’s height affects everything he does. At the age of nineteen he is referred to a specialist about his growth who informs him that he has a pituitary gland disorder for which there is no medical treatment available. There are few pleasures in life for the melancholic, solitary Tilman besides playing the piano and his burgeoning love of reading. When he is visited by a tabloid journalist claiming that he is the tallest man in Germany and the third tallest man in the world and wanting to write an article about him, Tilman initially declines. But then the family business falls on hard times and he reconsiders the journalist’s offer. Tilman submits to more and more media attention, his fame increases steadily and ‘the German giant’ becomes a celebrated figure.

When Tilman outgrows the attic room in his parents’ house, he vows to escape ‘the tyranny of small things’ and builds a pavilion in their garden in which everything is the right size for him. He meets and falls in love with Nina, who is the one person he knows besides his mother who values him for qualities other than his height. Tilman becomes a national treasure and a highly successful brand, with mass-produced giant-sized household objects bearing his name. He develops an international reputation and is inundated with offers to appear at events all over the world. Despite his newfound wealth, the only luxury Tilman allows himself is to have cherry wood shelves built for his precious book collection. Eventually he comes to recognise his abnormal growth as a blessing, without which he would have led a normal, uneventful existence and not been inspired to better himself or have met Nina. As his health begins to deteriorate Tilman withdraws from public life, confronts his death with stoicism and resolves to devote his remaining time to Nina, in whose arms he dies.

The Giant is a highly enjoyable read, distinguished by its unusual plot, its seemingly timeless narrative style and its quirky, minutely observed characters.

Stefan aus dem Siepen was born in 1964 and studied law before starting a diplomatic career in 1992. After postings in Bonn, Luxemburg, Shanghai and Moscow, he now works for the Foreign Office in Berlin. He lives in Potsdam with his wife and four children.

Deutscher Taschenbuch Verlag In summer 1960, eleven major German hardcover publishers – among them C.H. Beck, DVA, Hanser, Insel, Kiepenheuer & Witsch and Piper – decided to set up their very own paperback publishing house. Almost from the beginning, dtv was not only a paperback imprint for hardcover, but also a publisher of original paperback editions. Since 1996, Wolfgang Balk has headed dtv as publisher. He introduced a new visual brand for the house as well as dtv premium, a quality trade paperback in a larger format, exclusively for original and German first editions. Today, dtv is one of the leading paperback publishers in Germany.