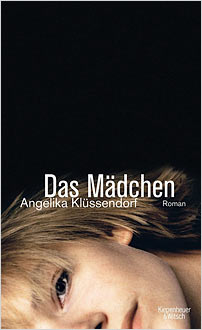 Klüssendorf’s portrayal of the hardship endured by a sister and her younger brother during their brutalised and brutalising childhood and adolescence is unflinching. The strength of ‘The Girl’ is found precisely there – in her capacity to endure her ordeal, to find escape hatches for herself that are absolutely necessary to her literal survival.

Human waste rains down from an apartment window onto the street below. An unnamed twelve-year-old and her five-year-old brother, Alex, have been locked in by their mother with only a bucket as a toilet, and the girl is dealing with it as best she can. Then she puts on her mother’s underwear and dances on the table for the construction workers opposite; she tries to force her brother to join her, slapping him when he protests.

This grim beginning is followed by an equally grim portrait of family life. The mother is alcoholic and unstable and takes pleasure in sadistically terrorizing her children and abusing them physically. Alex is increasingly plagued by neuroses that clearly derive from the punishment meted out to him by his mother, and sometimes his sister, and while the girl is too young to appreciate fully the psychological stress her young brother is under, she does see that something is wrong with him. Something is wrong with her, too, as the reader soon discovers in her choice of ‘games’ and ‘play’. Her favourite game is to stand at the side of a busy main road, then dash in front of cars to test their ability to brake in time. At some point she involves Alex in this game, with the result that he is hit by a car and breaks his collarbone.

The girl’s self-destructive behaviour finally lands her in a home. Accustomed to being shunned at school, she is surprised to find that her outrageous behaviour and volatile temper gain her a mixture of respect and fear. The last scene depicts her lying in a field, watching a flight of geese overhead, flying with them in her mind.

The Girl contains a number of disturbing scenes that are written in such a way that the reader, too, becomes anxious and fearful, particularly when the mother is involved, but the author also opens the door to glimpses of the woman the girl might one day become, if able to rise above her upbringing.

Angelika Klüssendorf was born in 1958 in Ahrensburg, and now lives in Berlin. She was awarded the Roswitha Prize of Bad Gandersheim in 2004.